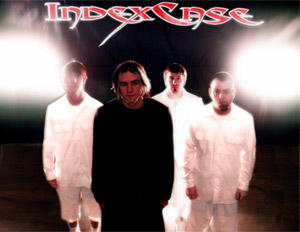 "[Index Case] is a band I believe in more than any other I've worked with."

-Curt Smith of Tears for Fears

Having just witnessed the thrashing sounds of Index Case a few weeks ago opening for Chevelle, yours truly (Hank) decided to skip their CD release party this past Monday, September 19th, 2005 at the Val Air Ballroom (I also skipped Green Day at the recently opened Wells Fargo Arena this past weekend too-- but tailgating in Iowa City was well worth the missed show!). To make this show, Index Case drove from Nashville (in the middle of their headlining tour with Bobaflex) just to play a show of thanks to the local crowd who has watched them grow from a local band to a band on the brink of national greatness. Never again will Index Case have to open up for big national acts; they now are the marquee act, and showed their appreciation for the opportunities given to them over the years by having a bevy of local bands open up for them.

Opening was Black Flood Diesel out of Minneapolis, Destrophy out of Iowa City, Venaculas from Omaha, and Mindrite from good 'ol Des Moines. Two of these bands will be playing again in Iowa soon: Mindrite plays at the House of Brick in Des Moines on October 28th, and Destrophy plays at one of my favorite (and the Lonely Note staff's) locales, The Reverb on September 30th in scenic Cedar Falls, IA.

Check out the rest of this story and pictures of the show at the Des Moines Register. And Don't forget to pick up Index Cases' major label self-titled debut on Sept. 27th!