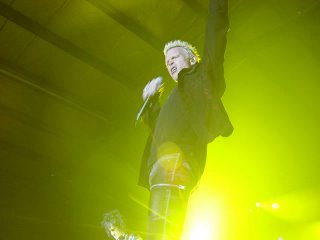 Ok-- so this is REALLY late, and I apologize. Not only did my original write-up get erased, your concert reviewer also has been using a spare laptop for a while now. My original acquired a virus and then the motherboard crashed, so my original laptop is MIA. Plus, Grad school has owned me, so again I apologize for this being so late, and since it was so long ago and I don't remember it all that well, it will be short (hooray!)

Just a few months short of his 50th birthday (and not looking a day older when he was a regular on MTV in the early 80's), Billy Idol stormed the Val Air Ballroom, with amazing and chain-smoking Steve Stevens helping on guitars. And did you think he still donned his leather pants? Well, just check the picture above, and of course he did! In attendance with your truly were Hank's parents, the one's who originally turned me onto Billy Idol with 1987's Vital Idol. Well, Billy is finally back from his dreadlock days and drug addictions (evidenced by two of his albums in the early 90's "Heroin" and "Speed" (haha)), and is luckily not doing any more rock opera's like when he played Cousin Kevin, in the Who's rock opera Tommy. I'm a straight male, but for a guy who turns 50 November 30th, he looked pretty cut-- after revealing his washboard abs, much to the females delight. He loves pleasing the crowd, and the girls went nuts as he strip-tease like removed his shirt several times during the show.

Billy opened with music from his latest release "Devil's Playground." I did not know any of these songs, and will say his classic stuff was much better (as expected). He played all of his favorites, like Rebel Yell, Flesh for Fantasy, Dancing with Myself, and Hot in the City. His best song of the night, and my favorite song, was White Wedding. After all these years, his voice is still strong and his customary wail is still soul-lifting. I will say he did lose me in the middle of his show, which lasted an amazing 2 hours and 17 minutes (no wonder there was no opening band). Sometimes I felt like I was at a blues concert instead of a rock concert. There were times Billy would play acoustic songs (with him on guitar), or even leave the stage for periods of 10 minutes or more and let Mr. Stevens or one of his other band-mates perform solos. Stevens is a great soloist, but I'm pretty sure there was not one person in the Val Air who paid to see him over Billy! There is definitely a good 45 minutes of that show that I have no recollection of while they slugged through some stuff I didn't recognize.

I awoken from my slumber as Billy and Steve broke into a version of Led Zeppelin's "Over the Hills and Far Away," and then an awesome cover of The Doors "L.A. Woman." He played a couple of new songs, and then ended the concert with a 16 minute rendition of "Mony Mony," off his 1981 solo debut "Don't Stop." How did Billy make this song 16 minutes long you say? Well, EVERY member of the band, including himself, rotated instruments, and in a very photogenic moment, all 5 of them stood at the front of the stage, each donning a guitar to close out the song. If the Val Air had allowed cameras for this show, yours truly would have gotten that picture. It was near priceless. We left the Val Air very happy and very deaf. It is good to have Billy 'freakin Idol back, and make sure to check him out on tour! And be sure to check out the rest of the Billy Idol pictures from the show at Lazer 103.3. They do a great job of bringing in great shows and taking great pictures much closer to the stage than I care to get to!

Next Week: Local H (Nov. 4th) and The Pimps (Nov. 5th) at Hank's favorite locale for watching music, The Reverb. Hank's girlfriend (and maybe some Lonely Note writer's??) will be in attendance.
Posted by Hank at 11:39 PM

With a Rebel Yell I can't wait to her More More More concert reviews ;)