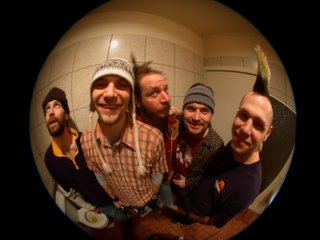 Question: Where can you drink Michelob Golden Light and champagne for free, watch a girl in a "orange crush" shirt dance naked on stage, and watch a bunch of punk and metal fans have a Michael Jackson dance-off?

The Reverb celebrated it's 4th Birthday (which explains the free booze) by bringing in one of it's staple bands, The Pimps! If being able to watch my favorite live band at my favorite venue wasn't good enough, the free keg and champagne made it that much more divine! Yours truly was introduced to The Pimps in 2001 when a girl I was dating at the time made me watch the horrible movie "Crazy/Beautiful" featuring Kirsten Dunst. The song is featured in the scene where she is sitting in her jeep waiting for her man after a football game. I made a note that the song was pretty cool. Soon after, a man much wiser than myself told me I had to come with him to the Reverb to see this awesome band. Not only did I recognize the song from the movie, I was blown away by their sheer energy (and catchy humor). Well, I did what any good friend would do, and I spread the word! Now, there is a group of about 10 or 15 of us that make every Pimps show possible, which is for me now in the double digits! Saturday night was no exception, as those of us who are still left in scenic Cedar Falls and those who still travel back there (myself) were not about to miss this show! Not only are the Pimps one of the favorite performers of the owner's of The Reverb, The Pimps also consider this one of there favorite venues to play at-- obvious by the fact that they come here about 4 times a year and have a big, loyal following every time they come!

The 5-man Pimps formed in 1994 in Rockford, IL. The band is made up by lead singer Stu, usually clad in a John Deere trucker hat, or more recently his cashmere style. GT, who always appears coked out of his mind, is on bass, and eternally-in-dreads Hilly plays guitar. They have two percussionists-- a drummer who's face I have never seen and a bongo drum player with an incredible mohawk. This punk-metal band, with album titles such as "To A Cool Person, Stay that Way," "Just Give Us The Grammy Now," and "More Songs About Drugs With Curse Words," plays mostly harder tracks. But don't be discouraged if you are not a fan of hard rock, because The Pimps are not your ordinary punk-metal band. As my girlfriend (who is DEFINITELY not a fan of hard rock) found out, The Pimps play to the crowd, which is why they are so popular. They love to tell jokes about sex and drugs, and do great covers of the country-western tunes "Devil Went Down to Georgia" and "Family Tradition." I myself do not like country music, but they do such a good job on these songs that I can't help but sing along. Another staple of a typical Pimps show include a cover of Tenacious D's "F**k Her Gently," along with a hillarious rendition of J. Lo's "Jenny From the Block." The guitarist Hilly usually sings a song, and this time he sang the equally-hillarious "Honey, Will My Fingers Do?" (and yes, it's about exactly what you think it is). Stu also usually likes to call someone on stage and make up a song about them-- this time it was about some white guy in a G Unit sweatshirt, which of course they had a field day with. The mohawked-bongoist usually has a song where he spanks some guys naked rear end, but this time they skipped that.

So as you can see, their shows can be enjoyable to people who don't like that genre of music. As I like to say, they put on a show, not a concert-- which is why a large diverse crowd comes to see this show! Along with all they songs they play above, other good songs include "Sumpin'" (The Crazy/Beautiful song), "Rocket Science" (on the Mission Impossible II soundtrack), "Machine Shop," "Would it Have Killed You to Leave a Suicide Note?" and "Star Wars." I have never seen The Pimps open for a band before(it's a good thing, since they would show almost every other band up!), but last Saturday they did, for a very similar band called Nil8. Insiders tell me this is one band The Pimps have no problem opening for, citing their great respect(and the fact they could drink while watching them). Nil8 plays very similar music, and definitely impressed me with tracks such as "Dominatrix" and a cover of "Humpty Dance." But of course I am biased and as good as Nil8 was, I still love The Pimps!

But something incredible happened after Nil8 left the stage -- as the post-concert music came on (which happened to be Michael Jackson's "Beat It," "Black or White," and "Thriller,") concert revelers, obviously still wanting more, formed a circle and had a dance-off. Who would have expected this from a punk-metal crowd? I witnessed a bunch of shirtless and heavily-tatted guys showing moves you would not expect from them. With the whole crowd going nuts, it continued for several songs. The dancing included fellow Lonely Note writer Tae, who did his best impression of the gloved-one! For those of you who think the only people who go to hard rock shows are trouble-makers, this should hopefully show you that most of us are just coming together for the love of good music, even if it is Michael Jackson! The night ended with Hank's girlfriend driving his Sunfire home (one too many MGL's) with 9 people inside, including one in the trunk! What a good night!

So if you have never seen The Pimps before, please make it a priority, and do this for me: Instead of buying their CD's first and then going to see them in concert, do the opposite; Go see one of their high-powered shows, then buy their CD's (which are sold at the show). You will appreciate their CD's more once you have heard how awesome their songs are in concert. Their albums, while very good, don't do their live shows justice. Then - repeat this process over and over, going to as many shows and buying as many CD's as you can. Trust me- their shows do not get old, and people (including myself) like them more and more each time we see them! If you live in the midwest, they are easy to see, as they play more than 150 shows a year covering Chicago, Madison, Minneapolis, Des Moines, and EVERYWHERE in between!

Next Week: Audioslave, Seether and 30 Seconds to Mars @ The Rave in Milwaukee

i don't know who hank is, but he is obviously queer. every line of his shitty review draws the reader into his line of thought that always seems to be on the male genintalia. he must be doing his two dads proud - well on his way to being a regular columnist on "ass-spelunkers" magazine.

I'm not sure where The Pimps are from... St Louis I think? Anyways, the insiders are correct. Take your own advice, and the next time you see Nil8(the greatest band in the world), pick up one of their CDs.- Try Eunuch or Halloween Hogwash, as Six Inch Extension and Hallelujah are no longer in print, you will not be disappointed. Sincerely,BenWaugh
loyal fan and mosh pit Fly Boy

The Pimps are from Rockford, IL. They happen to be awesome and should be seen in concert. NIL8 is also a go see band. I can't believe that these two bands aren't bigger than what they are. GET THE WORD OUT and GO TO SHOWS!

Mohawk guys name is Todd by the way. Anyway, these guys are actually really good guys who really have a passion for music. They have been an inspriation to me. Must see live!!