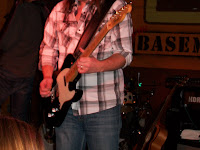 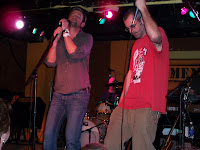 Thursday, February 18, 2010 -- The Basement in Columbus, OH
Hank here. I've been searching for a great small venue ever since I moved to Columbus in 2008 to see a good show (I wanted a place that reminded me of the now closed Reverb in beloved Cedar Falls). Sure, they have some good venues that I've been to here -- The LC, Schottenstein Center, Nationwide Arena.... There's also been a couple that I have wanted to visit, like The Newport, Skully's Music Diner, and the legendary Alrosa Villa (site of one of the most horrifying moments in hard rock history). But really to find a nice intimate venue, in a bar, with a "rough" look and good acoustics? I hadn't found it. Until Thursday night. The Basement was everything I had hoped for. When you walk up, there is a plain black door with no label and just signs for "The Basement" nearby. I actually wasn't sure I was walking in the right door. When I walked in there was a bouncer-looking guy waiting at the door. I almost felt embarrassed when I handed him my pre-printed Ticketmaster tickets (I felt like it was a place where you just pay at the door like a normal bar). Inside was a sweet looking bar that, for lack of a better word, looked like a basement. Leaky pipes, wood paneling, post-bills on the wall, graffiti on the bathroom wall, etc. But it was clean, and very comfortably feeling. My kind of place. Cheap beer, silos, and not too crowded. The stage was a slightly sunken in area, made for a crowd of about 50 or so. And as you can see from the picture, we were real close. There's no zoom on that photograph.

To the show. Most of you remember the Verve Pipe's teen anthem, "The Freshman," from 1996's Villains album. I remember it from my freshman year of high school. The boys from Michigan had a few other good songs, than largely disappeared for a few years. They have been recently (and oddly?) dabbling in some kids albums, which I will cover more later. We were a little late to the show, thanks to a slow-as-molasses sushi place just up the street. I don't even eat the stuff, but a group from work was going there, so you know I just had to go. There was opener listed, so they might have been in intermission, but I don't really know?? Brian Vander Ark took the stage, with a little less blond hair than I remember, but with the same soothing, easy-listening voice that made them famous. They are a very clean cut band, mostly settled-down looking with wedding bands. The bass player donned a french-looking cap. The drummer (original member Donny Brown) is clean cut with a shaved head. The guitarist Luigi, even though he had long hair, was cleanly dressed and shaven. All except, the harmonica player, Craig Griffith. Dressed in a saggy red shirt (seen above) which read "Reefer Madness", he definitely was in the same state of mind as his shirt, free and high as a bird. I think he may have been able to open his eyes just past halfway one time. He was a hell of a harmonica player though, dominating several songs, all while grooving like there was no tomorrow. He was constantly gyrating across the stage at all times. I think I'll call him the gyrator.

They slogged into a some of their good songs. "Hero," was definitely a winner in my book, with my man Luigi showing off my favorite guitar (as seen at top of post), the slim body Fender Statocaster. I'm not sure what it is about that guitar, but the sound is so raw and untamed. I feel like you can let loose on those guitars. To me, Gibson's are just too "pretty." I feel like you have to nicely strum Gibbies. They're too controlled in their sound. "Photograph," kept the beat moving, as did "Villains," both off of '96's "Villains" EP. It kept the Gyrator, well, gyrating. They also played a beautiful version of "Colorful," off of the Rockstar soundtrack, where Vander Ark dropped his Gibson for an acoustic guitar (unlike my man Luigi, who never takes his hands off of the most beautiful instrument I know, the Strat!) Then, they decided to play some of their kids songs. After 2001's "Underneath," the 6-piece from Michigan took some time off. In 2009, they came out with a kids album "A Family Album." They played "Complimentary Love," which wasn't all that bad of a song. Then came "Suppertime," with lyrics like this:

Interesting huh? Enter your own opinion. The one song they rocked from their kids album was "Cereal." Both Vander Ark and my man Luigi turned their amps up and busted that song out electric style.

I love my cereal, my cereal! Morning, noon and night!

Vander Ark really hits that second cereal on a good, strong note. I thought he sounded like somewhat like Daniel Johns of Silverchair when he crooned "Open Fire!" on "Ana's Song" from '99's Neon Ballroom.

Near the end of the set, they UNFORTUNATELY played a cover of Supertramp's "Take the Long Way Home." It's not that I have a problem with their cover, I jus HATE that song and I HATE Supertramp. Funny story about that is 2 days prior I was in our favorite little watering hole in Columbus, Brewski's, and some guy played that very song on the jukebox and I yelled out "Who the hell played Supertramp? They suck." Of course, it happened to be the guy right across the bar from me who of course replied "I did!" I kind of felt like a dick. Then I realized, no. Supertramp sucks. Who plays that shit? Well then of course Brian asked the crowd, "who wants to sing along." Next up was "The Freshman." They nailed it like I knew they would. His voice sounds just as good as when it first came out, 13+ years ago. Soulful, yet powerful. They went off for a quick encore, and then finished off with a cover of The Beatles "Strawberry Fields Forever." They started off the song slowly, but really cranked it up at the end finishing the song with a strong decrescendo.

What a great show. I was pleasantly surprised how much I liked the band. I usually go to most shows knowing at least 60-70% of the songs. I only knew about 30-40%,but I still thoroughly enjoyed it. I also found a phenomenal new venue and bar I will be frequenting. If in Columbus, make sure you check out The Basement. It's right next to another great venue, The LC in the Arena District. Check them out on tour as well as they are on the road for the next little while. And if you have kids, bring them to the show, as evidenced by the 1o year old girl in the front row hanging over the railing with her parents. The Gyrator also loved her as well, probably high fiving her at least 10 times during the show. And if you see them on the road, say hello to Luigi for me, and his beautiful Strat.
Hope to talk to you all again soon. Until then -- Hank.