Please note: The following is a rather-delayed followup post to my Day 1 review of the 80/35 Music Festival.


July 4th was to rain as July 3rd was to sun. It's often said in Iowa that "if you don't like the weather, wait 5 minutes" - and Independence Day was a perfect example. The day started out overcast, turned to drizzle, then briefly to a monsoon, then back to a drizzle, cleared up for a while, and then finally set into a pleasant mist just in time for Day 2 headliners Modest Mouse.

The crowd did not seem deterred, sticking it out through many an act on both the main and side stages. Fiddler Sara Watkins (of Nickel Creek) and Oklahoma indie band Evangelicals suffered the brunt of the rain, but the fans hung around. The bands expressed their gratitude to the steadfast audience . Some concert-goers wore the free festival ponchos, others toughed it out and reveled in their puddles, accepting the nature of an all-weather festival. A river rushed through one side tent, causing volunteers and bands to move soggy equipment to higher ground.

Des Moines' own Christopher the Conquered played early, but put on one of the highest energy shows of the whole weekend. Somewhere between the piano rock of Ben Folds and the squeals of Freddy Mercury, Christopher the Conquered belted out a piano-driven opus. Whether he was pounding the ivory or conducting the band from a ladder in the crowd, it was tough for any band to match the grandiose theatricality and talent of Christopher and his gyrating horn section.

Veteran Chicago band Califone played a terrific set of noisy, experimental post-rock jams. One friend at the show remarked that she liked to imagine all the group's members were "classically-trained musicians who decided to form a band." The members certainly had that seasoned, professorial quality. Multiple drum rhythms and layered guitar and keyboard created a gradual wall of sound that was simultaneously ear-piercing and undeniably bluesy. With a calm demeanor and wicked chops, Califone was amongst my favorite acts of the weekend. For a considerably mellower listen of the band's "All My Friends Are Funeral Singers", look no further than below:


The Cool Kids brought a bass groove so deep, it shook the windows at the volunteer headquarters nearly 2 blocks away from the main stage. The hip-hop duo delivered a playful set of rhymes, while fans nodded to the beats and waved their hands (and drinks) in the air.

British quartet The Heavy, known for their hit "How You Like Me Now?", took the reigns to close down the second stage. An unfortunate delay in their setup caused an overlap with main stage headliners, Modest Mouse. Still, The Heavy delivered on the name, bringing along a hard-hitting set of guitar rockers with a horn section to boot. Frontman Kelvin Swaby's soulful bravado and blistering vocals were seemingly aimed at James Brown's "hardest working man in show business" title. A fantastic live band, The Heavy were slightly overshadowed by the dispersing fans hoping to catch the headliners...

Which brings us to Modest Mouse. I gave The Heavy a few well-deserved extra minutes, but after overlapping 15 minutes, I headed back to the main stage. Figuring I would miss the opening numbers from Modest Mouse, I was surprised to find they had also delayed their cue. This allowed plenty of time to locate my friends and find a great vantage point from the lawn.

Opening with recent single, "King Rat", Mouse set the tone quickly. The stage was chock full of musicians and instruments, including two drummers to keep the crowd on their toes. Isaac Brock and company tore right into the crowd-pleaser, "Dashboard" from there. Without dipping much into their classic LP, The Moon & Antarctica, the band still played a deep catalog of songs that spanned many years and bent many genres.

There once was a time when I'd heard "Float On" so many times on the radio that I didn't care if it ever played again, but hearing it live suddenly made it new again. The crowd agreed, cheering the chorus of "All right already, we'll all float on" as if it were the national anthem that Fourth of July.

The band continued to pepper in popular songs between deep tracks, never giving the audience a chance to wander. A heavily applauded encore led to a wonderfully extended instrumental take on "Whale Song" (you can watch the official video HERE), sending sonar guitar squelches into the dark, misty night air. Soaked to the bone, I felt like a part of that ocean, breathing salty, listening to the calls. At times I swore I could understand them. But maybe that was just a contact high sailing in from somewhere amidst the sea of people...

It was another great day and a wonderful closing to the festival's third year running. I give my seal of approval to the hard-working volunteer organizers that have continued to bring a quality music festival to central Iowa.

Behind The Sample: Copyright Criminals

“I've found you've got to look back at the old things and see them in a new light.”
-- John Coltrane

Last night, I got a chance to watch Copyright Criminals, an intriguing documentary about the history of music sampling.

The film takes a strong look at both sides of the argument over artistic license. Can you really copyright a sound? How many notes of a song can you use before you're "stealing" someone else's life's work?

Some would argue that there are few wholly-original ideas, and that everyone has borrowed from others to get where they are creatively. This is not a new argument. When white men began to play blues-inspired music, they called it Rock 'n Roll and many were left feeling used.

When poor, inner city youths couldn't afford guitars, they improvised on what they had: turntables. Remixing and rapping over layers of old funk records and breakbeats led to a major revolution in music. However, it wasn't until that music gained popularity and made money that anyone took much notice.

Today's legal system of acquiring samples is so expensive that it has created a new disparity. Anyone relying heavily on samples has to be rich enough to pay for them or continue to release the music illegally.

This documentary aired on PBS' Independent Lens some months back. If you're a lover of music history or law, it's really worth your time. You can sample the trailer below: 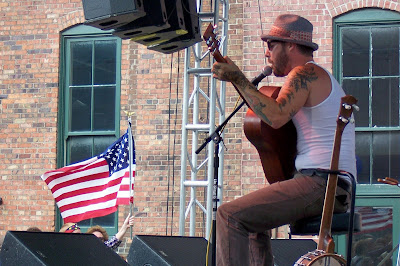 
The streets of downtown Des Moines were abuzz with music this past Independence Day weekend as the third annual 80/35 Music Festival brought in one of its strongest attendances to date.

Saturday kicked off the event, as music lovers filled the streets of Western Gateway Park. The festival grounds were set between Western Gateway's Pappajohn Sculpture Park and the city's Chipperfield-designed public library. Large insurance buildings towered on either side to provide an intimate venue for a crowd amassing more than 17,000.

Two free stages on the side streets supplemented a paid main stage. One free stage was dedicated to Midwest hip-hop and electronic music, while the other combined local and national talent ranging from roots folk to bluesy hard rock. More music was held inside at the Des Moines Social Club and on the streets of the fest's Do More Village.

On Saturday, the main stage featured acts like Spoon, Slightly Stoopid and Yo La Tengo, while the free stages were rocked by bands like Holly Golightly & the Brokeoffs, Earl Greyhound and Solid Gold. More than 25 bands played in the hot summer sun.

I had the pleasure of working both days of the volunteer-organized festival again this year as part of the stage support crew. This year, the free stage I helped at had one of the best lineups yet. I spent the weekend meeting bands, loading gear and listening to free music from backstage - so I had no complaints.

The Des Moines Music Coalition, which has put on 80/35 each of the past three years, created a strong lineup of national headliners, while still providing a large scale venue for showcasing local talent. Local bands Canby and Cashes Rivers were amongst the early bands to play the festival on Saturday.

Minneapolis' Solid Gold had a terrific set of heady, indie-electro rock that brought to mind images of MGMT and just about every Bret Easton Ellis novel. Glammed out songs like "Bible Thumper" and "Who Ya Gonna Run To?" were as melancholy as they were danceable. Echoed harmonies washed over layers of guitar, stirring into soup, yet staying afloat. Solid Gold put on one of my favorite sets of the whole day. Still unfamiliar? Watch the video to their single, "Matter of Time" below:

William Elliott Whitmore took the stage with nothing more than a guitar, a banjo and the raspy voice of someone who has truly lived. Whitmore stomped, strummed and howled some of the best Americana this side of the Mississippi. A humble songwriter fueled by moonshine and fascinated with sin and redemption, Iowa's own Whitmore belted out a full set for a hungry crowd. Occasionally, Whitmore would take breaks for a pull of whiskey or free beer offered from an adoring fan. Watch Whitmore's 80/35 interview, with clips of his performance, HERE (via JohnPemble.com).


Earl Greyhound, a New York City power trio of 1970s psychedelic blues-rock proportions, took the stage next. The group roared through songs from their albums Soft Targets and Suspicious Package. The shared vocal duties of guitarist Matt Whyte and bassist Kamara Thomas wailed as loud as anything coming from Jack White's The Dead Weather. Earl Greyhound was definitely a band to hear live for the first time. Visit the band's website to hear them for yourself.

When Spoon took headlining residence at the main stage Saturday night, they brought one of the weekend's tightest, most polished sets with them. Spoon performed much of their 2007 album, Ga Ga Ga Ga Ga, with songs like "Rhthm & Soul", "Don't Make Me a Target", and "Don't You Evah" shining through. The band also mixed in new songs from Transference, such as "Written in Reverse" and songs from the past, like 2005's "I Turn My Camera On". The latter received heavy praise from the crowd, which danced and cheered. A horn section backing the band added the perfect flavor to cap off the warm, summer evening.

Fortunately, I was able to wrap up my shift in time to sip craft beer and enjoy Spoon's entire performance before eventually heading to after hours with some friends in the downtown bar district. A truly great end to a great day of live music!