Behind the Sample: 'NARD 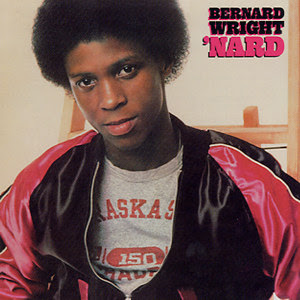 One of my favorite aspects of Hip Hop music is discovering the musical legacy behind the singles.  I love it when I stumble across an old tune and instantly recognize it from its use in a more-famous rap song. I've found a lot of great music this way over the years.

Many of the Hip Hop genre's biggest hits have sampled from Jazz, Funk, R&B and Rock songs, and from the earliest days of the rap scene, artists would dig through crates of old records for inspiration.  Sometimes just a few seconds from a dusty old album would speak to an artist enough to sample, loop and rhyme over.

For many young artists without the means for expensive musical equipment, two turntables and a microphone (cue Beck) were enough to create unique, original music.

Just last week, I was having a conversation about samples with a coworker and asked him if he'd ever listened to Bernard Wright's album, 'NARD, because a couple of the album's tracks have been prominently featured in some of Hip Hop's greatest hits.

He was unfamiliar, and realizing I didn't actually own it myself, I promptly ordered myself a copy of the LP on Discogs.  I've been happily spinning it since and that brings me to today's post...

'Nard is the near definition of a forgotten gem.

Bernard Wright was born in Jamaica, Queens in 1963--the son of the legendary Roberta "Killing Me Softly" Flack.  A prodigal young jazz/funk keyboardist, Wright began touring with jazz drummer Lenny White when he was only 13-years-old.

Wright's debut album, 'Nard, was recorded when he was just 16 and released in 1981.  While the album didn't gain as much momentum as it deserved, it did make it to #7 on the Billboard Jazz charts, and the single, "Just Chillin' Out", made the charts for both US R&B and Dance that year.

But here we are, 40 years later, and the album still holds up.

From the wacky, funked-out roller coaster trip of "Haboglabotribin'" to the beautiful piano rendition of Miles Davis' "Solar" concluding the album, 'Nard is a musical joy ride.

Wright's commercial career peaked a few short years later with the single "Who Do You Love?" (which was later the base for LL Cool J's hit single, "Loungin").

A few years after Snoop, 2Pac sampled the same song on "Lie to Kick It" from his album, R U Still Down?

The song's music box intro transitioning to full on, bass-slappin' funk was a major player in the memorable Snoop anthem.  Wright's amusement park raps and tweaked vocals throughout the song feel like a lost track from George Clinton.  It's goofy and weird, but funky as all get out.

Speaking of slap bass, the album's next track, "Spinnin'" is even more impressive -- highlighting Wright's keyboard skills and a tight horn section bringing to mind Earth, Wind & Fire or Kool & the Gang.

Around the 1:25 mark, the song suddenly switches gears to a laid back vibe.  That :15 seconds of chill was later sampled on the self-deprecating megahit 1995 song, "I Wish" by Skee-Lo.

Check out Bernard Wright's "Spinnin'" in the YouTube clip below, and then watch Skee-Lo's classic music video to hear the sample.

Songs from the album have also been sampled by The Afros, Yo-Yo feat. Ice Cube, and Anotha Level, and dozens of other artists.

The whole 'Nard album is worth checking out if you haven't heard it, and used copies of the out-of-print LP aren't difficult or expensive to find online.  Enjoy!

We would like to welcome guest poster Cassidy to the blog.  Born in 1996, from time to time she may choose to regale us with her unique "Zillenial" musical point of view.

In 2008,  'Disturbia' by Rihanna came out. It seems impossible that it has been 13 years since this club hit was released, and as we all know time passes us by, and it passes us by quickly.

As I have gotten older, I have started to appreciate the early to mid 00’s hits that defined my childhood; namely, staying with my big brother at his apartment and watching MTV Hits and Fuse (when it was still a thing).

I vividly remember staying up during all hours of the night, my tween brain addicted to recognizing songs that I had grown up on and newer songs that were airing at the time. It seems like yesterday when I remember hearing the the hook in Rihanna’s 'Disturbia' at 2 a.m., and entertaining the fix to watch the music video.

'Disturbia' was a radio hit that year, and it was always played at the pool I went to as a kid. When I think back to that year, I can remember how badly I wanted to be in my mid-twenties, going to the club and being able to "adult" (I know - very self aware).  I am almost 25 years old now, and every time I hear 'Disturbia' it takes me back to being 12 years old, the warm sun on my skin at the pool and not a care in the world. It actually makes me want to go back to being a kid (it’s funny how things change).

While 'Disturbia' was the focus of this post, I do want to give a huge shoutout to the other hits that came out in 2008. During that year, and other years while he lived there, I vividly remember hanging out at my older brother’s apartment and just enjoying the music. Every time I hear Rihanna, T-Pain, or Akon, it truly takes me back to a great time in my life, specifically, getting to hangout with my big brother.

Steve's Response:  Cassidy:  Thank-you for the guest post.  'Disturbia' was definitely a monster MTV Video Hit when it was released.  I still remember the live performance on the 2008 MTV VMAs.  It is definitely a part of the popular music canon today.
Posted by Steve at 2:41 AM 0 comments