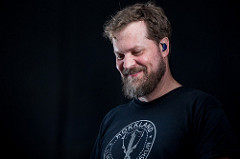 The former front man for The Czars, John Grant released Love is Magic, his third solo record since leaving the aforementioned band, on October 12 of this year.

To say the album is quirky would be understating it.

Imagine the lead singer of Crash Test Dummies deciding to jam with James Murphy and the guys from Kraftwerk, and you will better understand the spirit of Love is Magic.  Below are but just two stand out cuts from this wonderful LP.

"Diet Gum" could be mistaken as a novelty track, but that would be oversimplifying it.  The synths are mesmerizing, and the lyrics are clever and funny, so long as you allow all seven and a half minutes to develop in the way Grant intended.


You know, being with you was like a cross between Cannibal Apocalypse and Lassie 9
Except nowhere near as good as both of those movies were
It's still a personal conundrum of mine
How anyone can have such few of self awareness

The title track, "Love is Magic," emotes a much darker tone than "Diet Gum."  Out the gate, it addresses depression and medication and loneliness.  But the chorus turns on a dime, whimsically offering the listener an escape from the darkness by instructing them to simply give love a chance because you otherwise have nothing else to lose.  "Love is Magic" pleasantly surprised me with its ability to suck me in.