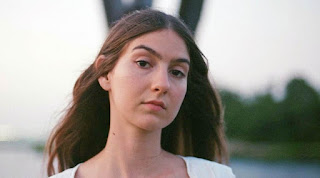 For those who appreciate Joni Mitchell, 'Wild Time' by Weyes Blood (a.k.a. Natalie Mering) may be right up their alley.  Equal parts chamber pop and folk, the track's sirenesque vocals surreptitiously lull the listener into spurious bliss.  Yet its choral hook all too quickly reminds the listener of the tragedy and chaos 2020 wrought.

Although 'Wild Time' was released on Sub Pop Records by way of Mering's Titantic Rising in 2019 (a full year before COVID-19 had infected its first human host, and America's original sin of racism was confirmed to have never truly been exorcised from the nation ala the death of George Floyd), the song's lyrics and foreboding spirit could not have been more prophetic or representative of the current milieu:

"Living in the rising tide

Our light, a feeling that's moving

Runnin' on a million people burnin'

Don't cry, it's a wild time to be alive

Nothing you want to change more

Heaven found and the lights went down

Everyone's broken now and no one knows just how

We could have all gotten so far from truth"

You can play the enchanting 'Wild Time' in the video player below.  (Note:  The video may be NSFW due to some scenes depicting artistic nudity).

Recently, I received a delightfully-unexpected early Christmas present from my Lonely Note comrade, Steve -- the 25th anniversary double-vinyl edition of the Singles Original Motion Picture Soundtrack.
For anyone uninitiated, the Cameron Crowe-directed Singles and its accompanying soundtrack are legendary in the unfolding success story of the Seattle Grunge scene of the early '90s.  It's one of the era's greatest movie soundtracks and still stands as an important document of American music history.  It was the right soundtrack at the right time. 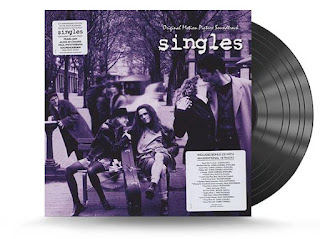 This review from Pitchfork covers a lot of ground in explaining the interconnectivity and rise of the local music scene in Seattle during that time period.
Bands such as Pearl Jam, Soundgarden, Screaming Trees and Alice in Chains all were prominently featured on the soundtrack right at the time when Nirvana's star was skyrocketing and Grunge was catching national attention.
Of course, for every major commercial success story, there are plenty of other great bands that unfortunately slip through the cracks and don't get the attention they desrve.
Truly was such a band. 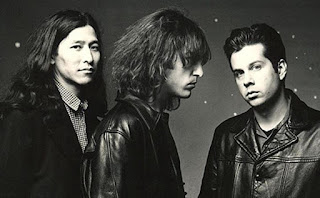 Truly was formed in 1990 by singer-guitarist Robert Roth, who had recently auditioned to be the 2nd guitarist in Nirvana (who decided to remain a trio) after the dissolution of his previous band, Storybook Krooks.
Roth was joined by Mark Pickerel, a founding member of Screaming Trees, and by Hiro Yamamoto, the original bassist for Soundgarden.
In 1991, the "supergroup" released their debut EP, Heart and Lungs, under the renowned Sub Pop label.  The title track was featured in the movie Singles, but unfortunately didn't make the cut on the official soundtrack release.  However, the 25th anniversary vinyl release does include a bonus CD chock-full of previously unreleased recordings from the movie, including "Heart and Lungs".
In 1993, as major labels were attempting to swoop up as many Seattle bands as possible, Truly was signed to Capitol Records.  Their full-length album, Fast Stories...From Kid Coma, was released to positive reviews in 1995, but failed to catch on like some of the band's contemporaries of the time.
AllMusic gave the album 4.5/5 stars, calling it a loosely-based concept album, with songs that "...further the swirling, psychedelic sound present on the group's early Sub Pop EPs, but show an even more refined sense of songwriting and arranging."
Right out of the gate, the album's opener--"Blue Flame Ford"--comes out swinging, with a deep chugging riff and wall of psychedelia, met with Roth's menacing-but-melodic vocals.  The song sets a tone for the rest of the album, which twists and turns in dense swirling layers of edgy rock that demand repeat listens.
Discouraged by the lack of support from Capitol, Truly departed back to an independent label, Thick Records, who released their follow-up album, Feeling You Up in 1997.
Although Truly stayed true to themselves and have continued to work together off and on for over two decades, they never quite found the mainstream or reached as wide of an audience as some of their Seattle brethren--which is truly a shame based on the quality of the band's songwriting.
Below, stream Fast Stories...From Kid Coma, the band's critically acclaimed debut, which celebrates its 25th anniversary in 2020.
If you're a fan of early 90s Alternative and Grunge, I highly recommend you download the full album from Truly's Bandcamp page, which also says to look for a remastered double-gatefold vinyl edition in the near future!
Posted by Tae at 11:42 AM 0 comments

If 2020 was a person, it would've been named "Year Least Likely for a Dance Club Banger" in your high school yearbook.
This year, COVID-19 actively halted large gatherings, concerts, and--understandably--sweaty nightclub dalliances.
However, that didn't stop Dua Lipa from putting out one of the year's most (dare I use the term) infectious pop albums with Future Nostalgia.
Even the album's title nails the mood of 2020--remember back when we could just pack a bunch of random people into to a tiny room and dance it out, breathing in one another's oxygen without a care in the world?  Who knew how much we'd take that for granted.
Lipa's major singles, like "Physical," have been blowing up the charts, even if her chants of "C'mon, let's get physical" seem weirdly out of place when you're manically bouncing around your bedroom by yourself.  But, it's that innate human desire for personal connection that's still striving to break out from the confines of your socially-distanced lifestyle.  So, in many ways, it's just the kind of album we needed.
Admittedly, I'm a fan.  Sure, I'd say I most typically gravitate towards the Rock genre, but I've always had a soft spot for a catchy Pop song. That's why if you saw my Year Wrapped list on Spotify, you'd see Dua Lipa holding her own right up there with the new Deftones album.
Upon my first full listen to Future Nostalgia a while back, I instantly picked up on a familiar sample from my youth in her song, "Love Again".
I paused the song and thought to myself, "Wait. Is that White Town?"
That's right, White Town.  Talk about some nostalgia...  Dua Lipa had me going all Marty McFly back to the year 1997 when my little sister owned the album Women in Technology based solely on the success of the one-hit-wonder, "Your Woman".  It's safe to say I've heard that song a few times, so  I'd recognize that little trumpety sample anywhere. But, what I didn't recognize was the rich history of its use, until I went down the proverbial rabbit hole.
According to WhoSampled.com, the Dua Lipa song does in fact owe a nod back to White Town, but that signature loop actually dates all the way back to a 1932 big band rendition of Bing Crosby's "My Woman," as performed by Lew Stone & the Monseigneur Band feat. Al Bowlly.
Right off the bat, you can notice the familiar sample, which was originally performed by trumpeter Nat Gonella on the 1932 recording.  Do you think Gonella would've imagined a bunch of millennials going nuts over his trumpeting in 2020?
After being picked up and repopularized by White Town nearly 65 years later, that memorable trumpet sample has continued to find an audience.
Just 3 years ago, it found its way into another dance anthem, "Fight Back with Love Tonight" by German electronica duo, Kush Kush.
Perhaps the Kush Kush sample more directly influenced Dua Lipa than White Town? After all, Lipa was only 2 years-old when White Town hit the charts (which subsequently makes me feel really old).  Or, who knows, maybe Lipa is a closet Big Band aficionado...?
No matter the case, I always enjoy hearing a familiar sample and tracing it back to its roots.  After all, passing along a song's rich history to a new generation is one of the true beauties of music.  In fact, when taking something old and making it new, one could even argue the result brings about a certain... Future Nostalgia.
Posted by Tae at 1:10 PM 0 comments

A few years ago, our colleague Tae wrote a post in which he pondered the sonic similarities between Glenn Frey's 'The One You Love,' and Taylor Dayne's 'Tell It To My Heart.'  Although Tae may have thought he was taking crazy pills when he developed his self-described "crackpot theory," he was ultimately vindicated when some commenters on his post concurred with his musings.

In a similar vein, I am here to present another, quite possibly, eccentric hypothesis.

Now, I have done some amateur sleuthing on the internet to see if anyone else shares this view, including other blogs and forums, and apparently I am on my own island with this theory.  Is there anybody else out there who agrees with me?

Check out the potential similarities for yourself by streaming the respective music videos in the players below:

Ratboys - 'Alien with a Sleep Mask On' 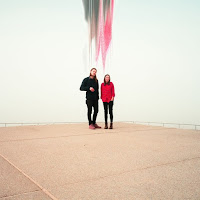 Funneling the feel-good sounds of Sixpence None the Richer with the much more secular alt-rock affections of Letters to Cleo, Ratboys have created a heck of a bop with their single, 'Alien with a Sleep Mask On.'  I can easily imagine early-nineties Liz Phair taking a crack at this one back in her indie heyday.

Ratboys claim Chicago as their homebase.  They have been on the scene since 2012, when Swerp Records released their debut EP.  The band has evolved throughout the years, originally starting out as an acoustic outfit, while incrementally adding electric distortion and fuzz to subsequent productions.

You can listen to 'Alien with a Sleep Mask On,' the opening track from 2020's Printer's Devil, in the YouTube player below:

Hotels has been described as New Wave Noir.  'Sides' by the Seattle band is consistent with that description:  It is dark and mystical and strangely gorgeous.
Heart throbbing bass leads off the track, whereby it ushers in haunting synthesizer.  The song's structure is a slow burn, plodding toward a worthy climax at the end of the composition.  The real payoff, however, is the sublime vocals of lead singer Adra Boo.  Her voice is just perfect:  candid, plaintive, soulful, and fervent.
Adra Boo has been a fixture of Seattle's music scene for some time now.  She was previously in Fly Moon Royalty, an electro-funk outfit.  She has also performed solo works and as a featured singer for several notable artists.  More information about this incredible vocalist can be found here.
A YouTube stream of 'Sides' can be found in the player below.  Additionally, a video of her recent KEXP performance is featured below as well.
Additionally, a Spotify link to some of Hotels' latest work can be found here.
Posted by Steve at 11:34 PM 1 comments