It was a room smaller than my Grandma’s basement; dark, concrete floored, and perhaps 800 total square feet.  The shoehorned stage was just hefty enough to fit some keyboards, a few pieces of audio visual equipment, and two, maybe three people comfortably.  Just above the stage hung a landscape reproduction of the famous Johnny Cash photo—the one where he cavalierly flips the bird.  No other photos or decorations adorned the chamber.

There were two total entrances to this space.    One door led to and from the adjoining bar.  The other door was located in the rear of the room and had a stickered sign stating, “THIS DOOR TO REMAIN LOCKED DURING BUSINESS HOURS.” (Which kinda meant it wasn’t much of a real door at all).  It was easy to grow a little claustrophobic standing in there.  And possibly even a little disenchanted.
This was the state of things while the crowd anxiously waited for Sexy Sax Man Tim Cappello to appear for his one-manned concert at The Fremont in Des Moines, Iowa on July 26, 2019.
Spirits began to lift, however, when Cappello discretely and briefly came out to survey the stage, clad in a non-descript flannel.  He gave his instrumental set-up a quick once-over, smiled at the waiting crowd, and disappeared just as quickly as he arrived.  It was at this point, the evening was about to get a lot more interesting.

Fifteen or so minutes later, Cappello burst through that very back door that was supposed to remain locked during business hours, and immersed himself directly into the crowd of one hundred or so.  With his brawny arms oiled up, and his still-lavish hair slicked back into a ponytail, Cappello blew his brass and belted out the lyrics to “Only You,” the opening track of his latest release, Blood on the Reed.

Playfully approaching multiple members of the crowd with his saxophone during this opening number, Cappello immediately personalized the show for each member of the audience.  You could feel that everybody understood from this moment onward, this show would not be a boring recital of some has-been playing his famous song from The Lost Boys.  Instead, we all knew this was going to be an unforgettable bash because the person putting it on demanded it be so. 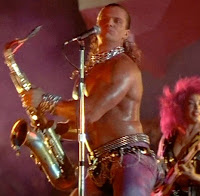 And about that inextricable relationship between Cappello and his cameo in The Lost Boys:  The Internet has made much comical hay of that movie appearance in recent years, propelling Cappello from reliable backing band member to Millenial Folk Hero status, in the same vein as Sad Keanu or Chuck Norris.  Yet, what was most impressive about Cappello’s performance was that, from the get-go, he straightaway owned his identity, by admitting to the crowd he knew that Lost Boys was the sole reason most of them were there.  He didn’t beat around the bush, trying to pretend to be something he wasn’t.  When he decided to play a new, original song he forewarned his spectators, humbly asking all of them to bear with him for just a few short minutes while he floated his new creation out into the modern ether.  He would then assure everybody that the song they came to hear was surely on its way.

Indeed, it was Cappello’s authenticity and candor which made him all the more impressive.  This wasn’t a man bitter that no one realizes he played with Tina Turner, Peter Gabriel, Ringo Starr, or that he was prominently featured on an episode of Miami Vice.  No, this was a pure entertainer who seemed genuinely grateful that he was lucky enough to gain just enough fame from a vampire movie in the 1980s, with a song called “I Still Believe,” written by The Call, to allow him the luxury to play music for the fun of it, on his own terms, thirty years later.

When it finally came time for Cappello to play his magna opus, he explained how “I Still Believe” almost didn’t happen.  He first recounted how his own original composition for The Lost Boys was rejected.  Then, he advised that, since The Call were made up of practicing Christians, they wanted nothing to do with a movie about vampires.  So, in a strange twist of destiny, Cappello offered to cover the song for the film, gyrate his hips, and the rest is history.

Toward the end of the concert, Cappello certainly milked “I Still Believe” for all it was worth, stretching the song to nearly fifteen or twenty minutes.  He even developed an interactive dance based around female lead of The Lost Boys, Star, which assisted in ensuring the audience remained engaged and motivated.

Finally, as “I Still Believe” wore down, Cappello playfully called for all of us to request an encore.  It was a tongue-in-cheek allusion to his unlikely ability to spare an extra song.   But despite the apparent lack of musical stock, Cappello did in fact produce a magnificent encore by covering the rock standard, “Tequila,” with an electric clarinet.  “Tequila” is the song that Pee Wee Herman famously danced to in the motorcycle bar during his Big Adventure.  And just as Pee Wee won over the stoic and antagonistic gangsters, Tim Cappello won over the hearts of his crowd, prompting them to raise their hands and yell “TEQUILA” during the iconic chorus of the song.  Who knew that an electric clarinet could wail so hard?

Following the encore and the conclusion of the show, Cappello set up at a meet-and-greet and stuck around to talk to his fans.  In the short time I conversed with him, I found him to be one of the nicest and down to earth showmen out there.  He was such a positive guy, that his confident energy was contagious.  For those who get a chance to see this 64 year old sax player perform, I strongly encourage you take the opportunity to do so.  You are sure to have one of the greatest musical experiences of your life.

***A special thanks to fellow contributor Tae who suggested we attend this concert—a concert I wouldn’t have in a million years thought of going to otherwise. ***

Below, here is the official music video to "I Still Believe" from The Lost Boys soundtrack: