Inspired by the upcoming celebration of All Hallow's Eve, I have decided to post about one of my favorite ghastly ode's to the supernatural - a tune so frightful it will leave you trembling with fear. Yes, I am talking about none other than Bobby Brown's 'On Our Own', the theme to Ghostbusters II. Bwa-ha-ha-ha-ha!

By 1988, with the release of his hit album Don't Be Cruel, Bobby Brown was no longer a new edition to the music scene. Having departed his colleagues Bel, Biv, and even Devoe, Brown found himself reaching a new level of national stardom as a solo artist. With the making of 1989's Ghostbuster's II, Brown decided to expand his prerogative. Seeing a chance to secure his position as an artist and at the same time, help boost his street cred, Brown did the only thing natural and laid down the groove. No longer would he simply be busting moves on stage - now he would also be busting ghosts via his lyrical wit. I guess you could almost say he decided to take a risk and "cross the streams." His contribution to the soundtrack, 'On Our Own', became the main theme to the film, and contained such insightful rhymes as these:

Too hot to handle, too cold to hold
They're called the Ghostbusters and they're in control
Had 'em throwin' a party for a bunch of children
While all the while the slime was under the building
So they packed up their group, got a grip, came equipped
Grabbed the proton packs off their back and they split
Found about Vigo, the master of evil
Try to battle my boys? That's not legal 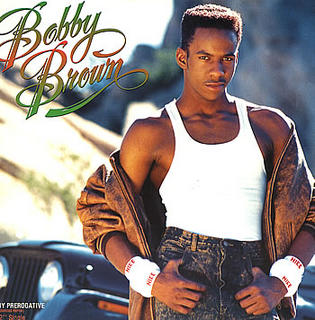 Vigo: Not a fan of Bobby Brown's music


Bobby Brown remained a national treasure well into the early nineties, but his music career slowly fell apart after he started 'humpin around' in 1992. He later regained his infamous persona through the media's attention to his numerous drug accusations and spousal conflicts with wife, Whitney Houston. But way back in 1989, a much simpler time, taking down ghosts and drinking Ecto Cooler was all that really mattered.
Posted by Tae at 9:25 PM 0 comments

OK. It's been silent at the Lonely Note lately. As a graduate student I’ve spent less time listening to bands like Socratic and more time studying Socrates’ opposition to the Sophists instead---more time examining Cicero’s Pro Milone and less time jamming out to Beck’s ‘E-Pro’---more time performing manual usability tests and less time absorbing The Used. You catch my drift…and unfortunately, my lame play on words.

In order to give our dedicated readers some sort of fodder to chew on until the rest of us have more free time, here are some tunes I’ve been listening to as of late. Enjoy:

This song is delightfully catchy, despite the band's mall-punk preface


Franz Ferdinand – ‘You Could Have it So Much Better’
Title track is one of the rowdiest songs on the dance-rock band’s sophomore effort
Posted by Steve at 4:45 AM 0 comments

The Killers Release Another Edition of Hot Fuss

I dig The Killers, but they are really starting to annoy me with their recent marketing ploys. Not only did they release an expanded version of their debut Hot Fuss, featuring more songs than the original pressing a few months ago, but now they are releasing a boxed set of the same album. Meant as a collector's album for "true" fans, the boxed version will be limited to only 5000 copies worldwide and will feature 7" vinyls for each song on the album. Each single is complimented with a cover, rarity or b-side.

To be made available for purchase November 22, here is the track listing for the box (with the B-sides included):

In Oxfordshire Radiohead has been plugging away on new material. The band’s seventh album is currently in the works and is scheduled for release sometime next year. Songs that have been developed and considered for the new recording include ‘Pay Day,’ ‘Burn the Witch,’ ‘Videotape,’ ‘Solutions,’ ‘House of Cards,’ ‘Down Is the New Up,’ ‘Last Flowers,’ ‘Skirting on the Surface’ and ‘Morning Mi Lord.’
Posted by Steve at 12:45 AM 0 comments

Listen to the leaked single here (Abba backbeat and all!):

For those who listen to National Public Radio on a regular basis, you are undoubtedly familiar with their flagship news program All Things Considered. A spin-off of this award winning show is All Songs Considered, an eclectic look into groundbreaking music---new and old.

You can now subscribe to the All Songs Considered podcast here, along with a vast collection of other programs. Or you can download the latest episode in MP3 format here.
Posted by Steve at 8:06 PM 0 comments

In February, Electric Six released Senor Smoke, a boisterous disc full of your typical garage-band-revival tunage. Now, only eight months later, there is talk of a new, third disc in the works.

Singer Tyler Spencer (aka Dick Valentine) says recording for the third album will begin in November:

“We’ve got most of it written but we haven’t rehearsed it as a band yet… The songs are really strong and I think they’re more complex and more mature and I think if we nail this thing the way it’s supposed to come off, it’ll be the best one yet.”

Prince - 'I Wanna Be Your Lover'

While we're on the subject of Prince, here's one of his first hits. It's off the self-titled sophomore album.

Who would-a thunk it? Minnesota’s Purple One is supposed to undergo hip replacement surgery. Decades of dancing and flailing around in platform shoes have battered the entertainer’s body to the point his joints are beginning to provide him with pain. Yet, because Prince is a Jehovah’s Witness, he is refusing to get the surgery. The religion does not allow for the necessary blood transfusion.

In the meantime, the Artist has been prescribed painkillers which, for now, allow him to maintain his energetic shows. Perhaps he should follow his own advice and purify himself in the “waters of Lake Minnetonka?”
Posted by Steve at 5:12 PM 1 comments

Only since Bachman-Turner Overdrive did it in 1974 has a Canadian band debuted at number one on the Billboard 200 chart. Nickelback's All the Right Reasons moved 325,000 copies its first week, with first single 'Photograph' receiving significant airplay in the recent month.
Posted by Steve at 2:15 AM 0 comments

The Dandy Warhols' newest album, Odditorium or Warlords from Mars, may have received a measly 1 out of 5 stars from Rolling Stone, but being a big fan of such hits as 1997's 'Not if You Were the Last Junkie on Earth (Heroin is So Passe)' and 2000's 'Bohemian Like You,' I felt I should at least give the band the benefit of the doubt. Although the album as a whole might not rank among the band's best work, I wouldn't go so far as to say that there is nothing of substance present.

The track 'Down Like Disco' features a sound reminiscent of Stone Temple Pilots' 'Sour Girl'. While one guitar plays rhythmically alongside the percussion, the other squeals away above the more subtle keyboard textures and vocal harmonies. The song may be fairly repetitive for as long as it is; it narrowly avoids overextending its 6 1/2 minute welcome by keeping the addictive, psychadelic guitar and chorus circulating throughout.

Maybe the few key tracks on Odditorium won't salvage the entire album, but at least a song like this one is able to cohabitate well with some of the band's stronger material from their decade-long career.

Working a late shift tonight, I decided to listen to some “old” favorites on my iPod. Ambulance LTD’s April 2004 debut was one such choice album I decided to tune in to. In my opinion, I'd have to say LP is one of last year's greatest discs. In fact, AMG reviewer Tim Sendra seems to agree with its importance to the world of rock and roll when he describes it as a “guided tour through the last 20 years of guitar rock.”

While songs like ‘Ophelia’ and ‘Swim’ are enough to help Stella get her groove back, my favorite cut off this particular selection is ‘Sugar Pill.’ I am not sure if it’s the Smiths-esque opening guitar or the neo-psychadelic vocals of hobo look-alike Marcus Congleton. All I know, though, is that as soon as the first measure of the chorus hits my ears I become a very happy man.

Story of the Year - In the Wake of Determination

Story of the Year - In the Wake of Determination
3.5 out of 5 stars

Story of the Year may not conjure thoughts of rough and tough, but on their sophomore effort In the Wake of Determination the St. Louis based band sounds more like Papa Roach than they do Dashboard Confessional. All previous associations with the weak and cheesy mall-punk scene evident on their debut Page Avenue are no longer prevalent. Instead, the band seems to emulate The Used in order to create more of a methodic metal sound.

In the Wake is by far brasher than its predecessor. While Page Avenue may have provided the perfect emo soundscape for deep introspection, this new disc spawns a soundtrack more appropriate for a fast night out on the town. It is likely that this sophomore effort may alienate fans of the band’s original sound, but it is just as likely Story of the Year have gained just as many new ones with this new musical course.

Sample 'Pay Your Enemy' below:

The Oranges Band seemed to have been on hiatus for a few years when The World and Everything in It surfaced. The band is relatively simple and lo-fi, and they remind me quite a bit of Elbow. Their Track One song off of The World has been played on several indie stations as of late, and is available for streaming below:

Newly recorded covers of John Lennon's "Woman," Joe Walsh's "Rocky Mountain Way" and the Moody Blues' "Go Now" will be found on the Ozzy Osbourne collection "Under Cover," due Nov. 1 as a Dualdisc via Epic. The remaining 10 cuts were released earlier this year on the "Under Covers" disc of the Ozzy boxed set
"Prince of Darkness."

Among them are Mountain's "Mississippi Queen," which features that band's guitarist, Leslie West, King Crimson's "21st Century Schizoid Man," the Jeff Beck Group's "Hi Ho Silver Lining," Mott The Hoople's "All the Young Dudes" and the Rolling Stones's "Sympathy for the Devil."