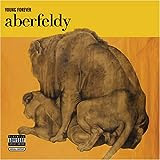 Emulating the folksy, Berkeley sound of the 1960s, Aberfeldy's "Young Forever" is the embodiment of mellow. Like the first soothing drag of a marijuana cigarette, the music on this particular disc slowly transports your soul to planes beyond the 4th and 5th dimensions; aka to another time and another place. Whimsical? Yes. Mystical? Of course. Just another album to get trippy to? Not so much. This Aberfeldy masterpiece is much more than that.

A bit chamber pop heavy at times, cheap keyboard sounds serve as an appropriate back beat to the love-heavy, drug tinged lyrics on several of the tracks. The male and female harminization is quite present on many of the tracks as well, and add a sort of utopian element to the disc, as both man and woman work seamlessly together to create brilliant and beautiful sounds. Additionally, "Young Forever" is full of experimentation all throughout, indicated by the use of alien voices and spacey synth-pop keyboard ditties.

Make love, not war seems to be the overall thesis of this record. Saturated with total positivity, "Young Forever" possesses the power to lift even the biggest Grinch into a pleasant mood. Simply, this is an ultimate feel good-album whose purpose serves as a breath of fresh air to those increasingly inundated by news of dying Popes, questionable wars and a recent slew of natural disasters. Genuinely good natured, "Young Forever" is an audio commune of sorts--the 2000s version of 1960s Vermont.

Some notable tracks include: