Behind the Sample: The Notorious B.I.G.'s "Juicy"

"Super Nintendo. Sega Genesis.  When I was dead broke, man I couldn't picture this." 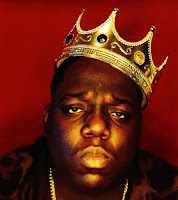 It was all a dream for Christopher Wallace, a.k.a. The Notorious B.I.G.

The hip/hop artist took the rap world by storm in 1994 with the release of his monumental single, "Juicy" - a personalized rags-to-riches tale that went on to sell more than a half million copies and secured his status as one of the biggest rap stars in history.  It's been called one of the greatest hip hop songs of all time by critics from Rolling Stone to The Source.

Biggie was, as his name implied, a large man. And he was a man with big dreams, who details his struggle and aspirations in "Juicy".  The song discusses his childhood ambition to become a famous rapper, and to escape from his impoverished Brooklyn upbringing.  In "Juicy", Biggie name-drops many of the artists who inspired him as a youth, including Heavy D - one of the first overweight rappers to find mainstream success.

In his early teens, Biggie started dealing drugs and found himself in and out of a jail cell, but his sights were always set on music stardom.

The opening of the song openly declares it's dedication, "...to all the teachers who said I'd never amount to nothin'".  Sure, many of the lyrics read like a laundry list of his lavish possessions, but for every boast he makes, he juxtaposes it with a hardship it took to get there.

The deepest message of the song lies within the chorus -- "You know very well who you are, don't let 'em hold you down, reach for the stars..."

It's one of the most uplifting choruses in hip/hop, speaking to all of those other kids who grow up with nothing more than a dream.

The Notorious B.I.G.'s life was cut tragically short when he was killed in a 1997 drive-by shooting, but his music - and his dream - proudly lives on.


But let it be known that the musical sample for "Juicy" dates back more than a decade earlier...

Mtume, an accomplished percussionist who'd previously toured with Miles Davis, formed his namesake group in the late '70s.  The band reached their height of popularity with "Juicy Fruit" - a midtempo track that proved immensely successful on R&B stations and dance clubs.  While the single never quite reached the Top 40, it still sold more than a million copies.

The popularity of "Juicy Fruit" established it as a staple in the hip/hop sampling community and has lived on successfully in various incarnations in the 30+ years since its release.  For a full list of artists who've sampled it, visit the song's Wikipedia entry.

You can watch the videos to The Notorious B.I.G.'s "Juicy" and Mtume's "Juicy Fruit" below: