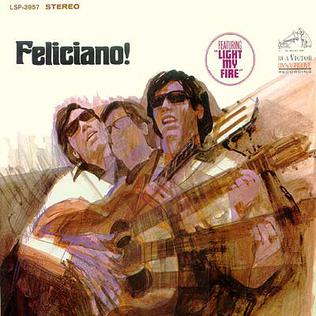 I first remember learning of Jose Feliciano when I was watching a public television music documentary about the 1960s with my father when I was 15 or 16 years old.  In the featured clip, a young, sunglass-donning Puerto Rican was belting a Latin-styled version of The Doors' 'Light My Fire.'

I was perplexed.  I was a mini-Stan of Jim Morrison at the time (which was the en vogue thing to be in the late-90s, following Oliver Stone's groundbreaking biopic of the rock legend earlier in the decade), but I had never heard the single arranged in such a peculiar way.  My dad explained to me that Feliciano was blind (hence the sunglasses), and that this particular version of 'Light My Fire' was a fairly big hit when he was in Junior High twenty five years earlier.  Candidly, I wasn't very impressed.

A few years later, while I was a student in my high school's Spanish Level 3 class, the instructor coincidentally decided to play another performance of Feliciano, once again bellowing 'Light My Fire' to acoustic guitar.  And as had been my original reaction only a year or two before, I remained unmoved. (The nexus between an English-singing musical artist who just happened to be of Latin descent, and the teaching of the Spanish language to Anglo-American students seemed flimsy, even at the time).

For the next twenty or so years, my only exposure to Jose Feliciano was on a yearly basis, when local radio broadcasted ad nauseum his Christmas anthem, 'Feliz Navidad,' a song so kitschy, the regional Mexican Restaurant chain Taco John's used it for years as the music behind its TV commercial jingles.  Again, I was unimpressed.

Then, in 2019, Quentin Tarantino released his love letter to the Second Golden Age of Cinema: Once Upon a Time in Hollywood. The stratified thriller ever-so-craftily set chic fashion, lustrous smiles, and unbridled ambition against the backdrop of the subtle and sinister forces of 1969.  The linchpin to such effective mood-setting was the film's score, which includes at many times actual vintage recordings of L.A. radio D.J. "The Real" Don Steele from local A.M. station KHJ.

In Hollywood, one of the featured tracks is 'California Dreamin'--- not by The Mamas and the Papas, who originally composed and popularized it, but by, you guessed it, Jose Feliciano.  Feliciano's version is restrained and stretched out; it is much quieter than its antecedent.  And it pairs faultlessly with the corresponding scene in the movie to set the perfect atmosphere.  Unlike my previous exposure to Feliciano, I was no longer indifferent to him, but now quite astonished and intrigued.

I began to research the man and his catalog, and I discovered that Feliciano is a master of the reimagined cover song.  Think on the same level as or better than Eric Clapton's "Unplugged" version of 'Layla' and Joe Cocker's Woodstock version of The Beatles' 'With a Little Help From My Friends.'  Feliciano not only flawlessly remakes any song he touches into his own image, but he has done it on an incredible scale for multiple decades.  Refer to his cover of Michael Jackson's 'Billy Jean' for just a scintilla of proof.

A great introduction and starting point for the uninitiated to Jose Feliciano is his eponymous Feliciano!, which was released in 1968, and just happens to be his most commercially successful album.  It reached Number Two on the U.S. albums chart.

Feliciano! is comprised of cover songs only.  It features the aforementioned 'California Dreamin' and 'Light My Fire.'  It also contains three Beatles tunes.  The Burt Bacharach penned 'Always Something There to Remind Me' is included as well, and it is a delightful reinterpretation.  But even though none of the songs on the album are an original, they are nevertheless unique and captivating, providing a gateway to an entirely new palette of music for listeners of rock music who may not have otherwise stepped in that melodious direction.

I will feature a few of the tracks from Feliciano! in the video players below.  The album is certainly worth checking out and best listened to from start to finish, as opposed to a single at a time.  It is spacious and light, but earnest and brave. It is the fitting soundtrack to a relaxing dinner, yet perplexing enough to make the pickiest audiophile ponder.  It has quickly risen to become one of the favorite records in my entire collection.  And that makes me very glad.

In a world of boundless access to any song ever created by way of music streaming and social media, it is refreshing and inspiring to know it is still possible to discover "new" music, so long as you are willing to open your mind and remove your preconceived notions.    Jose Feliciano has patiently and authentically continued to make incredible music in a career spanning over five decades by just being himself.  He has been here the whole time, even when I wasn't willing to listen.  I wonder what other great artists I have foolishly deprived myself of due to hubris.  I am immensely thankful to Jose and to Feliciano! for teaching me such a valuable lesson.