Action Action - Don't Cut Your Fabric to This Year's Fashion 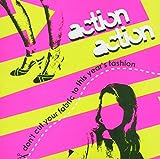 
I saw a television commercial a while back advertising that Action Action is a combination of Depeche Mode, The Killers and Franz Ferdinand. But it would be a travesty to marginalize this stellar new group into such narrow categories. On their first major label debut, Action Action fuses industrial rock with synth-pop, college indie with a little pop-punk. Clearly a product of the current musical time, the group may have reached a fork in the road as to which path they should take with their music. Yet, as Yogi Berra once said, "If you reach a fork in the road, take it." With their debut, Action Action certainly makes a noble attempt to do just that.

Don't Cut Your Fabric to this Year's Fashion "greets" the listener with a deep and brooding synth chord. "Welcome to our dark world," seems to be the message that this gothic track would be wanting to emote. The mood lightens somewhat, however, as soon as the first chorus sounds, probably to serve as an intro to their similarly sounding debut single 'Drug Like.' Whimsical synthesizer, combined with pleading vocals, 'Drug Like" resonates as a cry for help. The subject matter is deep and rather depressing. A collective epiphany seems to occur once the chorus strikes as you discover along with vocalist Thomas Kluepfel that, "I'm starting to scare myself." Kluepfel's personal pain and experience transcends itself beyond the recording studio and into your soul.

On 'Eighth Grade Summer Romance' a clear transformation occurs from dark and brooding to bouncy power-pop. The fork in the road reference made above becomes more and more apparent as Kluepfel's vocals sound more like Art Alexakas of Everclear's than his own more natural sounding, pleading drone of earlier on the record. Perhaps creative differences within the band account for this dramatic shift from the beginning of the disc? The guitars are simpler and more bouncy here as well, although this should not ruin the credibility of the band by any means. In fact, 'Eighth Grade Summer Romance' is catchy in all the right ways, and its purposeful immaturity is directly analogous to the subject matter its title references. Yet while titles are one thing, lyrics are another altogether. Another song about flirtations with suicide, 'Eighth Grade' provides the listener with a more tongue-in-cheek look at the topic.

On 'Four Piece Jigsaw Puzzle' the synthesizers are turned off, and the drum sticks are retired. Simplicity is the name of the game with this simple ballad, as acoustic guitar, melodious vocals and limited piano are the only instruments used. Maybe it is at the end of 'Four Piece' that Action Action figures out exactly where they want to go when Kluepfel sincerely sings, "I'm starting to understand." Immediately, the disc turns back towards the beginning roots of the disc and a reprise of 'This Year's Fashion' begins.

'Don't Cut Your Fabric' is an upbeat rendition of track number one's 'This Year's Fashion.' With pretty much the same lyrics as track number one, 'Don't Cut' appears to exude much more confidence---to be much more sure of itself than its track one partner. A delicate balance between goth and pop is reached, and Action Action seems to have found their niche by the time 'Don't Cut' leads into 'The Short Weekend Begins With a Longing,' the album's finale.

Don't Cut Your Fabric to This Year's Fashion is not your kid sister's album. Serious, thoughtful, dark, deep and complex, Don't Cut requires serious commitment on part of the listener. While this may discourage many novice listeners, in the long run Action Action are doing themselves a favor while they continue to refine their sound.

For a debut disc, this album performs. Yet Don't Cut falls short in just a few ways to keep them from reaching full potential. The rock fan will be disappointed by Action Action's flirtation with power-pop, while the pop fan will find it hard to bob their head to any one song. This lack of true definition raises a lot of questions, and will subsequently have a hard time convincing the one-genre-only listener to buy this disc. On the other hand, music fans with an open mind will appreciate the variety of talent the band displays and their poetic lyrics. The eclectic fan will recognize that Action Action holds tremendous strength for future discs.