Rage to play at Alpine Valley 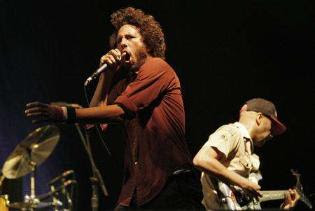 90's punk-rap heroes Rage Against the Machine, which just happen to be yours truly Hank's favorite band in the world, revealed on Tuesday they will play a concert Friday August 24th at the Alpine Valley Music Theatre in East Troy, Wisconsin.
If you have been living in a cave, RATM had been running a cryptic countdown on their website with two countdowns, one for June 11th and the other for August 24th. Tech-savvy fans deciphered the code long before it was announced; by setting your computer clock forward to the countdown deadlines, it revealed the concert announcement. They also figured out the location, since Live Nation ran the site and also own Alpine Valley!
Now if any of you have read any of my past posts, you may recall that I had tickets to a Rage show back in 2000, just before they broke up. You may also recall that because of the Beastie Boys' Mike D broke his arm riding his bike through Central Park, they cancelled the concert, never rescheduled and Rage broke up! It is time for redemption!! I'm guessing it will be near impossible to get tickets, but it's worth a try. It will be worth waking up early on Saturday morning for!
The concert is scheduled to begin at 7 p.m. on Friday August 24th at Alpine Valley. Tickets go on sale this Saturday, June 16th, at 10:00 a.m. CST. Opening for Rage will be Queens of the Stone Age.
Rage will also be playing 4 dates at the "Rock the Bells" festivals this summer; Saturday and Sunday July 28th and 29th at Randall's Island NYC, Saturday August 11th at the Hyundai Pavilion at Glen Helen in San Bernardino, CA (or the NOS Events Center?), and Saturday August 18th at McCovey Cove (parking lot?) in San Francisco, CA.
In the words of Zack de la Rocha, "It has to start somewhere, it has to start sometime. What better place than here, what better time than now?"
Posted by Hank at 1:03 AM

UPDATE -- I got tickets! I'll be there! See you August 24th at Alpine Valley for some Rage!!