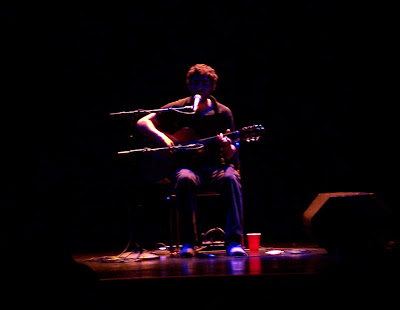 José González played a captivatingly intimate show at Chicago's historic Park West theatre on October 4th in support of his new album, In Our Nature.

I was excited to hear from my sister last week, who informed me that she had won tickets to the show. Being a longtime José fan who had never seen him live, I quickly seized the opportunity so thoughtfully bestowed upon me.

The venue provided stadium-tiered seating at booths and tables. A mirrorball hung overhead in the domed center of the ceiling. Drinks were served from the full bar at the back of the room; servers weaved in and out of aisles throughout the night, taking orders.

Softspoken Brit James Blackshaw opened the night with a set of four vocalless medleys on his 12-string guitar. Blackshaw showed his acoustic chops with prog-lullabies like "River of Heaven," as eyes slowly drifted shut around the room.

Between acts, the predominantly young-adult audience grew substantially. When chairs ran few, the crowd began to seat themselves on the floor around the stage.

González took the stage by 8:30, setting the tone with "How Low" off his new album. The low notes echoed through the room in deep resonance as the melodies cut with precision. Delicate vocals accompanied his tight fingerpicking with ethereally haunting textures. Every touch rang out with clarity. Sparse words were spoken between songs, as González kept his guitar carefully tuned.

The first notes of his popular single "Heartbeats" were met with heavy applause. A microphone lay at one foot, catching the rhythms of his metronomic toe-tapping. On "All You Deliver," González' thwacked out beats with his thumb between chords, and a shuffling drag of the hand across the strings added an attacking groove to "Down the Line."

nice tae. i'm really glad you could come. it was a good evening.

We're deeply impressed by your fascinating blog and would like to officially offer you collaboration. On your blog pages you might place our own music critics' reviews of the new album releases. All of them are unique authors' materials. The reviews will be provided for free and the only condition of our collaboration would be the placing a backward link to the source of the review on your blog.

You can find the examples of the reviews here: http://musicmp3.ru/reviews.html

If necessary, we would gladly provide you with an automated interface with access to reviews' pages.

nooooooooooooo! I was just looking for some set lists to see if he ever does Love Will Tear Us Apart and he did for you. I saw him last night and oh woe I wished for that.