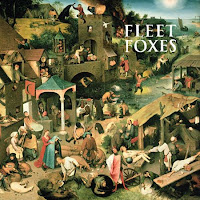 Fleet Foxes is arguably one of my favorite new bands of 2008.

An amalgamation of folk-gospel, soft-rock and Brit-pop, the band's retro stylings fall somewhere among the likes of America and Iron & Wine.

The band makes such a convincing argument here for Southern-fried folk-rock, it would be hard to peg Fleet Foxes as a Sub Pop act from Seattle.

You can stream 'Blue Ridge Mountains' below: