Last weekend, while picking through crates of vinyl at an Antique Jamboree, I was beckoned by the thunderous call of Jay Ferguson's Thunder Island. 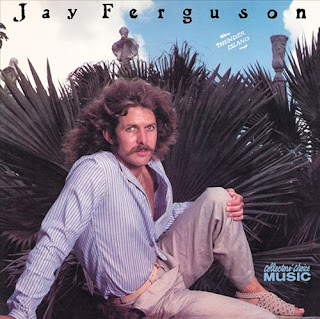 It was on sale for a buck.  And although a bit dusty and well-played -- particularly the title track -- it was well worth the investment.  Thunder Island is, of course, a classic album of the Yacht Rock era.

Heck, even if the record had been missing, the cover photo is easily worth the dollar alone...

For those uninitiated, the single "Thunder Island" is a tasty - albeit cheesy - relic of '70s soft rock.  The instantly recognizable guitar hook and "doo doo doo doo!" backing vocals suck you right in from the get-go.

The song has a Jimmy Buffet-meets-Eagles vibe to it; a song for rockin' out while sipping margaritas in some tropical paradise.  And it's fitting, because The Eagles' Joe Walsh contributed his guitar chops to much of the album.

Thunder Island was Ferguson's second, and most successful, solo outing after performing with bands such as Spirit and Jo Jo Gunne.

Now, let's dig a little deeper and discuss Spirit -- an immensely talented, yet largely forgotten band of the late '60s-'70s.

Spirit formed in 1967 with Ferguson and 15-year-old Randy California (who had been in an earlier band with Jimi Hendrix) at the songwriting helm.  Spirit's 1968 debut album was as an eclectic a mix of musical styles as any of their contemporaries, mixing hard rock with jazz, blues, country and folk.

While Ferguson wrote most of the debut's tracks, California contributed the acoustic ballad, "Taurus" -- an instrumental piece that inspired the intro to Led Zeppelin's epic "Stairway to Heaven".

"I Got a Line On You" is a hard-driving rocker with a great chorus.  It has all the workings to be a classic, but for some reason has gotten a bit lost amongst the other great singles of its time.

The band split in different directions over the next decade.  California and Ferguson each went the solo route, while other members branched out to bands including Nazareth, Heart and Firefall.

Spirit did reform in various incarnations into the early '90s.  In 1997, California was swimming in Hawaii with his family when he was tragically swept into a riptide and never seen again.

A critically heralded and ambitiously innovative band during their heyday, Spirit lives on today through their recordings, which I'd recommend looking up.

Below is a video for "I Got a Line On You" from the band's brief reunion in 1984.  **Bonus: check out guitarist Skunk Baxter (the Doobie Brothers, Steely Dan) jamming out in the back!