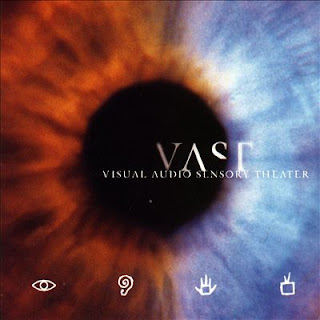 I remember when I first heard V.A.S.T.---aka Jon Crosby's solo project---on the radio.  It was 1998, I was still in high school, and as I was laying in bed late on a Sunday night, I was listening to a radio show called hardDrive with Lou Brutus on my clock radio.  When the lead single, 'Touched,' was broadcast on the program, I quickly took note, as I hadn't ever heard of anything quite like that at the time.  The song contained acoustic guitar, plus Benedictine Monks, plus hard industrial sounds reminiscent of Nine Inch Nails, plus orchestral accompaniment.  Indeed, it was quite different from the hard hitting sounds of Korn, Rob Zombie, and Monster Magnet receiving heavy airplay at that time.

Afterward, I recall going to a faraway mall two hours away and buying the album.  On the way home, as my mother drove, I remember popping the self-titled disc into my CD-Walkman and finding myself engrossed by just how distinctive and diverse all the tracks were.  For example, 'Dirty Hole' is comprised of several layers systematically building atop one another, not the least of which includes those same Monk chants and Cathedral pipe organ.   And 'Three Doors' beautifully meshes Industrial Pop with the Classical canon.  And 'Here' is probably one of the coolest, cinematic-sounding openings to an album in recent times.

I have posted a few YouTube videos featuring a few of the great tracks from this album.  In descending order, they are 'Touched,' 'Three Doors,' and 'Here.'  Feel free to stream them and enjoy the greatness that is Visual Audio Sensory Theater, one of my favorite under-the-radar albums of the 90s.