Climax Blues Band - 'I Love You' 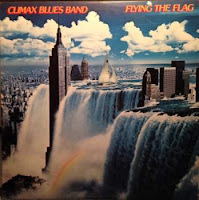 You know that part in 'Maybe I'm Amazed' by Paul McCartney, where the song, at about the 2:17 mark, does that piano change-up thing-- do-do-do-do-do-do?  Unfortunately, I am not skilled in properly articulating music (in fact I have absolutely no idea how to talk about music in the technical sense), but you can hear exactly what I am talking about here.

Anyhow, if you have ever imagined what the sequel to such a chord progression (or is it regression?) might be, then 'I Love You' by Climax Blues Band may be just the answer.

Such a statement is not meant to diminish the 1980 single as a cheap Beatles rip-off.  To the contrary, 'I Love You' carries just as much emotional heft as the McCartney-penned doppelganger.  Indeed, the lyrics serve as a sincere ode to those one-of-a-kind women out there who, against all advice to the contrary, decide to take a chance and partner with that possibly problematic man, through thick or thin and for better or worse:

When I was a younger man I hadn't a care /  Foolin' around, hittin' the town, growing my hair / You came along and stole my heart when you entered my life / ooh babe you got what it takes, so I made you my wife.

You came along from far away and found me here /  I was playin' around, feeling down, hittin' the beer / You picked me up from off the floor and gave me a smile / You said you're much to young, your life ain't begun, let's walk for awhile.

'I Love You' reached number 12 on the charts in 1981, but I feel it gets undeservedly low airplay today.  Perhaps it is because it has been overshadowed by the English band's disco-infused A.M. radio staple 'Couldn't Get It Right'?  In any event, even if the song is no longer on the radio rotation today,  'I Love You' by Climax Blues Band definitely belongs on any of Star-Lord's walkman awesome cassette mixes, and likely in your personal Spotify playlist.

Watch the video for the undeservedly forgotten 'I Love You' by Climax Blues Band below: