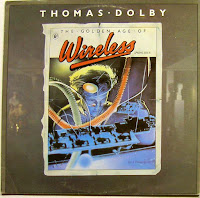 For the casual listener, the mention of Thomas Dolby likely spawns visions of quirky synth pop, coalesced with the Poindexter look Dolby adorned in his music video for worldwide smash 'She Blinded Me With Science.'  (SCIENCE!!)  Indeed, 'She Blinded Me With Science' is a banger that still carries Party DJ cred today.  Unless you are a hardcore fan, though, the rest of Dolby's catalog--and even other songs featured on the very same album as 'Science'--have gone completely overlooked.

Track 3 from The Golden Age of Wireless is 'Airwaves.'  (Point of reference:  'She Blinded Me With Science' is Track 1).  I first came across the track not long ago as it was playing in the background of a satellite radio station or random Spotify station;  I really can't remember.  But what totally grabbed me were the verses' uncanny melodic similarity to Billy Joel's 'Goodnight Saigon.'  In fact, I first thought it was an alternate version of the Billy song, however, the sprawling, spacey, multi-layered chorus immediately informed me 'Airwaves' was a completely different--and frankly much better-- record altogether.

For fellow nostalgia junkies, 'Airwaves' is a signature artifact from Generation X's formative years.  It is a perfect combination of eccentricity, the subterranean, and New Wave.  The corresponding music video definitely bears this out.

In fact, you can check out the music video for 'Airwaves' in the player below:

Good post, man! Dolby is a legit artist that unfortunately got pinned as a gimmick for his "...Science!" persona on MTV, when he had a lot more depth to offer.

I heard "I Scare Myself" on a playlist about a year or so back and had to do a double take that it was the same guy. https://www.youtube.com/watch?v=jUHYLBxmUEw

Thank you very much for the write up. I also thought it was "Goodnight Saigon" the first time I heard it.