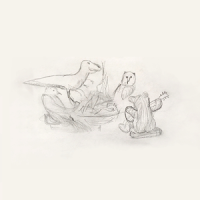 A person wiser than I once told me that all relationships end.  Whether it is a relative, friend, or lover, all associations cease due to death, breakup, divorce, or some other circumstance.  Although a relatively simple notion, the idea had never crossed my mind before.  Instead, I had often found myself clinging to the shadows of former bonds without recognizing or accepting this unavoidable reality.

It is human nature to clutch what is familiar.  On the surface, it seems ideal to try and preserve the status quo at all costs.  But a world without endings is also a world without beautiful new beginnings.  It is a world of lost potential and unrealized discovery.  Nevertheless, the changeover from one reality to a new one can be some of the most painful journeys a person can endure.

It isn't very often that I hear a song that can almost compel me to tears, but 'Change' by Brooklyn's Big Thief is so honest and pure, it is almost paralyzing with how fierce it depicts the grief of letting an old life go in favor of welcoming a new one in; a process that is not always a voluntary one.  Singer Adrianne Lenker's vocals are tender and disarming.  They present some of the most intimate pleadings to be captured on a record.

Would you stare forever at the sun,

Would you walk forever in the light,

To never learn the secret of the quiet night?

Often, there are hidden joys to be found in the intimidating silence of the unknown.  But you have to be brave enough to step into the abyss in order to find them.  Is it sustainable to never depart from the known path, or do the unforeseen forks in the road instead inspire hidden resilience and strength necessary to nourish the spirit?  This brilliant song does not hesitate in its answer.

You can stream the beautiful 'Change' in the player below: