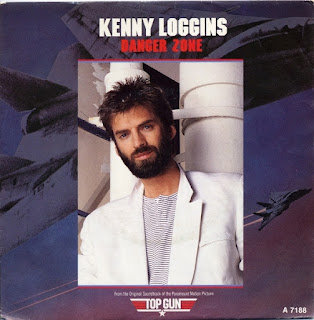 If you were one of the bazillion people who watched the international smash hit, Top Gun, when it came out back in 1986, you were likely rocked to the core by the sensational, bombastic Kenny Loggins theme song, "Danger Zone".

And perhaps, after leaving the theater, you may have rushed out to your local record store to buy the 7" single of the song on vinyl.

Now... if I asked you what the B-side to the "Danger Zone" single is, would you guess "Playing With the Boys" from the film's iconic volleyball scene?

If so, you would be wrong.

While "Playing With the Boys" (and its accompanying scene) is amazing in its own right, the song you would have actually found on Side B was "I'm Gonna Do It Right" from Loggins' 1985 album, Vox Humana.

Vox Humana was Loggins' fifth album, and was his first album following his wildly successful title track to the 1984 Kevin Bacon movie, Footloose.

For many critics, Vox Humana was a big disappointment.  Loggins was at the height of his musical powers in the mid-80s and decided to make the leap of faith from acoustic guitar-wielding Yacht Rocker to the dangerous zone of overproduced, synthesized pop rock.

The album also had to follow High Adventure, Loggins' most commercially-successful album, which featured the singles, "Heart to Heart", "Heartlight", and the Grammy-nominated Steve Perry duet, "Don't Fight It".

But if you slept on Vox Humana or forgot to flip your "Danger Zone" single over, you may have missed out on "I'm Gonna Do It Right" -- a funktastic track featuring none other than the legendary Pointer Sisters on backup vocals and Sheila E. on percussion.

It is easily one of the most uptempo dance tracks in Loggins' deep songbook, and I'm sad to say I'd never heard it until this week because it's a real club banger.  As a child of the '80s, I couldn't help but love it right away.  Give it a spin in the player below, and get ready to cut. foot. loose.

Postscript:  Fellow blogger, Steve, and I once attended a Kenny Loggins concert at a local casino roughly a decade ago. I went in expecting a routine run through of the hits (for which Loggins has MANY), but what I was not expecting was the exuberance and showmanship he had for performing and he belted out 30+ year old songs with the enthusiasm of a young man who'd just recorded them rather than someone who had played them thousands of times. It was a great show!
Posted by Tae at 5:33 PM

I did NOT expect Kenny Loggins to pop up here! Thank you for bringing this to the World's attention. I'd add that what the new Top Gun ...Maverick... film is missing is the killer soundtrack of the original, honestly don't think anything stuck as well as Take My Breath Away, Danger Zone and the film underused the full majesty of Harold Faltemeyer's theme. Still a great film, maybe it's one of those projects where I'll get my band to do a live boombastic 80's soundtrack it deserves one day.