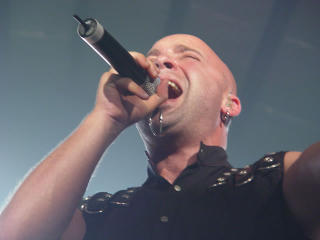 "Music is supposed to be about intensity and feeling, but there's no thinking
behind the music that's out there today


I won't lie: I was a little late to the show (good 'ol school) so I missed a good portion of 10 Years, the opening band on this very special Lazer 103.3 birthday bash. The Val Air was still borderline unbearable, making me almost (but not quite) wish it was winter, which is amazing considering an Iowa winter is pretty unbearable itself. If you've heard 10 Years' single "Wasteland" on the radio, you wonder what they are doing opening for Disturbed and Ill Nino. After listening to the end of their set, I still wonder. 10 Years is an alternative rock band sounding similar to bands like lo pro, Sinch, Submersed, and No Address, a band I previously saw and reviewed. This 5-piece, based out of Knoxville, TN, formed in 2002 and just released their major label debut Autumn Effect, which is in stores now. After hearing some of their songs, like "Prey" and "Through the Iris," I could easily see the comparison to No Address: Easy-listening rock and roll with good solid chords and a soulful lead singer, being Jesse Hasek. Much of Autumn Effect was written about the culture-shock the band went through after relocating to Los Angeles. Jesse sang about topics such as possessions, the overtly-rich Beverly Hills area, and "walled-in human existence." After listening to him sing and preach, I now saw why this band was included with Disturbed -- Mr. Hasek is very much like Mr. Draiman, in that he is very passionate about music and believes in the spirituality of his music. This is total speculation, but my guess is that David wanted this band on tour with them! 10 Years in on tour through November 13th, so check them out!

"We all pushed each other and refused to hold back. I feel like this is the first real Ill Niño record. We busted our asses on this one. This is what
Ill Niño should have been since the very beginning."
-Christian Machado

Having already seen Ill Nino once before (opening for Sevendust in 2003), I knew exactly what to expect when this 6-piece took the stage. Lightning fast riffs and a frenetic pace highlight this band from Brazil. With 2 percussionists, these Sepultura-disciples are able to have a full-time tribal percussionist, which helps define their sound. Christian Machado's vocals slice through each song, with an incredible ferocity and urgency. Formed in 1999 and signing with Roadrunner in 2000, they released their first two albums "Revolution/Revolucion" and "Confession" in 2001 and 2003, respectively. They churned through favorites such as "This Time's for Real," "What Comes Around," and "How Can I live." With their new album dropping this Tuesday (September 27th) titled One Nation Underground, they played some new material in support. One song that caught my ear was "What You Deserve," a catchy song that really stuck with me for a while. I found out later it will be there first single, so look for the video soon! Machado described the album as natural and unconventional. He said they listened to Salsa, Merengue, and Santeria to get ready to make this record. And as you can tell by his quote, he is incredibly proud of it. So when you go to the store TODAY to buy the new System of a Down and Index Case, make sure you pick up Ill Nino's One Nation Underground as well. Check them out!

"We like coming to Des Moines because this is a very pissed-0ff part of the
country. We hope we can give you a place to vent your rage" - David Draiman

When I saw Disturbed at the U.S. Cellular Center in 2003, I said bluntly it was the best concert I had ever seen. This statement was made not based on their music, but the show they put on. They carried themselves on stage as Gods, and thus I regarded them as. Whenever I see a band carry themselves like this AND back it up (ie Black Sabbath), it sends shivers down my spine. They did this very well in 2003. Now let's fast forward to 2005. They nearly blew the roof off of the U.S. Cellular Center, so I was anxious to see what they would do to the diminutive Val Air. After seeing them for the second time, one thing is very clear to me: they sound much better in an arena. This is not to say they didn't play well, their sound is just muted in such a small place. They are built for large 10,000+ stadiums (hence their third album, 10,000 Fists, which dropped last week). Nevertheless, David Draiman was up to his old tricks, stopping every few songs to spit some politics and his own brand of spirituality, calling his audience his brothers and sisters (and making sure we knew we weren't Maggots). He even called out one fan in the audience who was flipping him off. I am a slightly religious guy who definitely believes in God, but I can't help thinking He is talking whenever David speaks to the audience. He has this incredible presence about him, and his deep, spiritual voice always captivates me. I also love his incredible articulation and intelligence (he wasn't a two-time panelist on ABC's "Politically Incorrect" for nothing). Seems kind of odd for a guy who was kicked out of five boarding schools before joining the band in 1997. And don't forget that growl, or studded tank tops! He only smiled once the entire show, and that was during an encore when the crowd stomped for more. The Chicago-based band, formed in 1996, was called "the future of metal" by none other than Ozzy Osbourne. The band sights bands such as Pantera and Iron Maiden (yes, Bruce Dickinson) as their early influences, and more recent bands such as Korn (sans Brian "Head" Welch) and one of yours truly's fav bands, Soundgarden. They played a tribute to Dimebag Darrel Abbot's family just to show their appreciation.

They opened the show with "Guarded," following that up with "Voices" off of their multiplatinum debut, The Sickness. My favorite song of the night was "Intoxication" off of their second CD Believe. They played all of their favorites including, "Prayer," "Believe," and "Down With the Sickness." They played my new favorite song "Stricken" out of the encore and closed off with "Stupify." One thing I noticed with their new songs was more solos by guitarist Dan Donegan, something you can easily hear in "Stricken." I also noticed the tats on the new bassist (John Moyer formerly of The Union Underground), in direct contrast to the rest of the band which boasts no tats (at least not that I could see). Overall, it was again a good show, with the crowd more interested in soaking in Draiman and Co. instead of moshing and crowd surfing. In fact, there were no mosh pits and ONE singular crowd surfer the ENTIRE show. I chuckled and thought to myself that I saw a wilder crowd for the Goo Goo Dolls and Tonic when I saw them in Dubuque, IA in 1999! Look for Disturbed to appear on an upcoming Faith No More tribute album. They start a European tour in October, start up again back in the States in November, and are on the Jagermeister Tour beginning in December. Make sure to get out and see them and pick up their new album! Check out the rest of the pictures from the concert at Lazer 103.3

While you are mentioning the tribute to Pantera's Abbott you might review the work of his heir apparent, Travis Thompson, of San Antonio. I'm not sure he has shared his work or released any albums but his speed guitar play is almost a "Vai-sion" of things to come. Perhaps Tae could get a pirated copy of his works to put on the website. Keep up the good work!