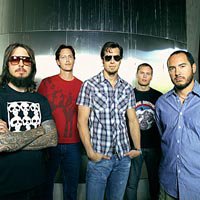 Alient Ant Farm -- I won't lie. We completely missed these guys. We arrived just after 8:30 p.m. and they were already off of the stage! Some bouncer said they only played for like 20 or so minutes. So that sucks. Oh well -- our clan of past and present Cedar Falls-ites (plus a few others) just went to the bar while we waited!

311 -- Celebrating their 15th year of being a band, the 5-member 311 from Omaha, NE came to W. Des Moines to put on a good show. And a good show they did. Now I usually stand somewhere near the middle or even back of most shows just to listen, but for some reason I was feeling rowdy so I went up near the front. Well was I in for a wild time. It wasn't the most I've gotten thrown around at a concert (that honor is reserved to the Incubus concert I saw in Cedar Rapids, IA @ the 5-seasons center in 2002), but I did have to do a fair amount of making sure I didn't end up on the ground. I got thrown into a few mosh pits. Can't say I'm a huge fan of being in those, but I did get to throw a few elbows (and not have to feel bad about it!). There were a couple of times I almost fell into the chaos, but some nice fellow mosh-pitters picked me up before I fell. Who says you can't make friends there? I also got to witness some slender dark-haired girl on some guys shoulders who seemed to be allergic to her t-shirt (she was behind me, but there were plenty of times I got "inadvertantly" turned around, so I was "stuck" looking at her!) I did not, however, do any crowd-surfing. My crowd surfing days began and ended on the same day, at a Goo Goo Dolls/Tonic concert in Dubuque, IA @ the 5 Flags Center in December 1999. I gave my keys and wallet to a friend went up, and was promptly dropped directly on my back. It hurt bad, and I haven't done it since. One advantage of being up in front (getting my butt kicked) is that it was too violent for the "marijuana-crowd," so they were safely behind me. Enough of me. Now to the band.

311 opened with "Creatures (For a While)," which was a sweet tune to open with. Nick Hexum and Co. were really on their game. "Beautiful Disaster," came soon after, followed by the 50 First Dates remake, "Love Song." A yours truly 311 fave followed next, the trippy "All Mixed Up." It wasn't until this song (for some reason) that I realized SA Martinez had a huge cast on his right arm. I thought for a second, then it hit me. As it was reported last week on the Lonely Note, Martinez broke his hand in a fist fight with our Lord Jesus. I laughed to myself for a second. On another note, here is Jesus' rebuttal to the incident. (note: if you want to see pictures of SA's cast, as well as a great Scott Stapp shirt some guy was wearing @ the concert, visit http://www.kccq.com and click on "311 Concert Pictures" -- Clear Channel Entertainment seems pretty strict about hyperlinking and posting photos, so go check them out there!) Getting back to the concert, another highlight was a great drum solo by the entire band on "Applied Science." They brought a whole bunch of drums to the front of the stage and played for a few minutes. Definitely photo-worthy.

I do have to apologize, I was so into going crazy, I didn't take time to remember most of the songs they played. I know I heard "Whisky and Wine," and "Mindspin" in there, as well as an extended version of "Nix Hex." "Speakeasy" was another good song. Then 311 did what most bands won't do (except for two of my faves, The Pimps and Local H), and that's play a crowd request. Throughout the concert, kids were chanting "Who's Got the Herb?" Finally, I think Hexum and Mahoney had heard enough and played the song! The place went nuts! They then finished off pre-encore set with 4 huge songs -- "Amber," "Come Original," "Don't Tread on Me," and "Down." It was definitely the wildest during "Down." 311 then went into encore. Afterwards, they finished the show with "Omaha Stylee," and a great version of "Feels So Good." It was during that last song I sustained my first and only injury of the night. I had been part of a few guys putting people up into crowd surfs the entire show. I had probably helped 15+ up to that point. Well, the last one, I just wasn't paying attention, and WHAM, I took a shoe to the face. I spent the entire time during "Feels So Good" making sure my nose wasn't broken.

Well, after their 24 song set, and being covered in sweat, I didn't care that much about it. 311 put on a great show and I would definitely see them again. After the concert, we hightailed across the street, and then a huge snow-covered area to reach my favorite Des Moines pub, Charlie's Filling Station. I also took a huge dive into the snow on the way over, which seemed like a good idea at the time for how hot I was, but was a horrible idea after I did it. At Charlie's, we celebrated the 311 concert, getting together with everybody, and of course the University of Northern Iowa Panthers' victory over Texas State in the Division 1-AA football semifinals! The NCAA championship is this friday night, December 16th at 7:00 p.m. on ESPN2 vs. Appalachian State. Make sure you tune in. Go Panthers! Have a great Xmas and New Year's!

Coming 2006: Nine Inch Nails concert, CD reviews of Staind and System of a Down, CD release updates, , 2005 year in review music(?) etc. I'm open for ideas, comments, criticism, hate-mail, etc. And of course, I'll be at concerts are in the area!
Posted by Hank at 3:08 PM