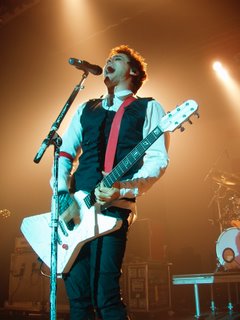 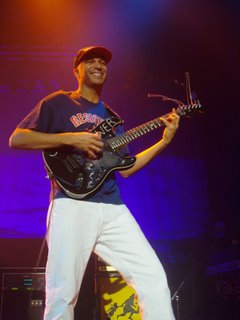 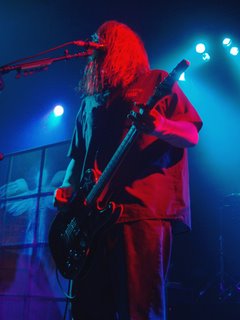 30 seconds to Mars - After a long drive across the plains of Iowa, Illinois, and Wisconsin, yours truly and two accomplices arrived at the Rave for the 3rd time in our illustrious careers (previously for The Darkness and Deftones) at 8 p.m. JUST in time for the 1st 30STM song (after paying $25 for parking! $25!!). Quite, honestly, I didn't know what to expect from Jared Leto and Co. But hell, knowing he's been with Cameron Diaz, one of the Olsen's, AND Lindsey Lohan, he gets the benefit of the doubt (and on another note-- who isn't jealous of his life- movie star AND rock star!). On the way up, us 3 Amigos committed concert faux paus and listened to both their 2002 self-titled debut and their new disk, A Beautiful Lie. I hadn't heard much of them, so I needed to hear them before seeing them in concert. In concert, even though they only played a short 6-song set, I was very impressed with the pipes on Jared Leto. Man can he wail! I could listen to him on "Capricorn" all day long! "Attack" was another great song they played. They were very good live, but I didn't get the full energy that I got from them on their EP's. One thing we all liked about Leto (with brother Shannon as the AMAZING drummer) was that they set up a table after their show to meet all fans and sign autographs. How many bands are that approachable? And I did get to see that Jared can't be any taller than 5'8". I really liked 30STM, so be sure to check out their EP's. I'll leave you with this quote from Mr. Leto about his new disk:

"On the first record I created a world, then hid behind it. With A
Beautiful Lie, it was time to take a more personal and less cerebral
approach.... A story of life, love, death, pain, joy, and passion. Of what
it is to be human."

Seether - I've had two concerts cancelled in my life. My first was Rage Against the Machine in August of 2000 at East Troy, WI when Mike D of the Beastie Boys broke his arm riding his bike through Central Park (they never rescheduled, then Rage broke up -- yes I still hate the Beastie Boys to this day -- GRRRR!). Since Rage is my favorite band, and I never got to see them. This was quite heartbreaking to an 18 year old kid. The second concert that got cancelled was Evanescence and Seether when they were supposed to play the UNI-Dome in scenic Cedar Falls, IA in November 2003. That one was cancelled because Amy Lee messed up another band (see: Evanescence, Cold, and Seether -- haha just kidding!). But that was when guitarist Ben Moody left the band in the middle of the tour. I didn't care too much about seeing Evanescence, but I was ticked to miss Seether. So redemption at last! Besides the fact that Shojn Morgan looks like a bum they pulled from the streets outside of the Rave, he has a great voice and stage presence(he looks much larger than their debut CD -- did Amy Lee make him quit drugs?!?! -- just kidding!). They did not play much longer than 30STM, only about 40 minutes. Of course, they played their two new singles off of their new disk Karma and Effect, "Remedy" and "Truth," the latter of which I really like. They played "Fine Again" in memory of the late "Dimebag" Darrell Abbott. Of course, "Gasoline" also made the set list. They played a bunch of new material I didn't know, but sadly did not play my three favorite Seether songs, "F#*K It," "Needles," and "Driven Under." I never like when bands don't play your favorite song (see: Chevelle "Closure"), but my disappointment would be made up when the next band took the stage.......

Audioslave - When members of my 1st and 3rd favorite bands combined in 2001, needless to say, I WAS ECSTATIC! To me, Chris Cornell has the best, most soulful, and powerful voice I know in rock 'n roll, along with Paul Rodgers and Chris Robinson. And you just can't beat Morello and Co. hammering away powerful riffs. Maybe they haven't quite lived up to my incredibly lofty expectations I put on them as a band with their CD's (but how could they?), but they definitely made up for it in concert. I can't say this more bluntly: Audioslave was the best concert I have ever seen! AND IT'S NOT JUST BECAUSE OF THE LOFTY STATUS THESE BANDS HOLD IN MY HEAD. Let me explain:

I had read concert reports that 'Slave was playing lots of covers, but I had no idea how many they were actually going to play! They opened very Rage-esque with Mrs. Morello proclaiming "Get ready for the best band in the world - Audioslave!", and then with songs off their new EP Out of Exile, playing "Your Time is Gonna Come," and "Out of Exile," along with a few others. Then they dropped the art-work for 1991's Badmotorfinger, with awesome renditions of "Rusty Cage" and "Spoonman," which I thought coundn't get much better. Boy was I wrong. Then Rage's Red Star dropped, and they busted into a killer version of "Bulls on Parade" (If you've ever seen the intro to my favorite DVD of all time "Rage- Live at the Grand Olympic Auditorium," - it is exactly the same as their intro into "BOP" in the DVD, and JUST as awesome as it looked!). Wow- that place went nuts. I was going nuts. Morello's guitars were just as good, loud, and piercing as I could have ever dreamed of. They played half of the song, and then burst into a mean version of "Sleep Now in the Fire." Cornell, now in his 40's, sounded really good on that song! I almost didn't realize Mr. de la Rocha wasn't there. Almost. After a long ovation (and me thinking it couldn't get any better), they broke back into 'Slave, with songs like "Shadow on the Sun," "Doesn't Remind Me," and "Like a Stone," along with a few others.

Then the stage got dark. Rage left, and Cornell came out with his acoustic guitar. He played a perfect version of "Black Hole Sun," followed by an absolutely incredible version of "Fell on Black Days," with Shojn Morgan of Seether. It couldn't get any better...... but then he played a song I never thought they would play. Cornell played Track 13 of their debut, "Getaway Car." I always wanted to hear that song, but never thought I would. He finished off his acoustic set with "I am the Highway," with the band joining him halfway through the song. Then they played "Show me How to Live." I figured they had one song, maybe if we're lucky two songs left at this point. I knew "Cochise" had to be one of them. The other one I was not prepared for. If you've ever seen a concert hall go nuts before, you know what I'm talking about. When Morello started the familiar cords for "Killing in the Name," the entire place started bouncing. The scene was indescribable. It felt like the floor was moving. Even though I had said it already about five times that night, it was "the best song of the night." Morello was so loud and Cornell sounded so convincing, I didn't even notice it wasn't Zach on stage crooning. I thought they might cut out the "x-rated" ending to the song, but never fear, they played the whole song! After Mike D cost me my concert five years ago, I never thought I'd hear that song. I could now die happy. But the night was not over. After bringing the Rave down to it's knees with "KITN," the ended with a dyn-o-mite version of "Cochise." Talk about leaving on a high note.

I love guitarists. Eric Clapton, Eddie Van Halen, Steve Vai, Jimmy Page, B.B. King, etc. But on that given night, and through his whole career, I swear no living guitarist can combine earth-shattering riffs and killer solos much like Tom Morello. Nobody. You really have to be their live to catch his energy. Even at age 41, he still moves on the stage like he's 21, leaping in the air, jamming to the songs. Even though Cornell is the vocalist, Morello owns the stage. I hope he stays around for a long, long time. And Cornell sounds just as good as he ever had. The thing I enjoyed most about the night that was unlike most bands I see, they played EVERYTHING I hoped they would! They didn't skip one song that I wanted to hear. For two hours of my life I was in near heaven. Chris Cornell, Tom Morello, Brad Wilk and Timmy C played for two hours. I could have listened to them all night.