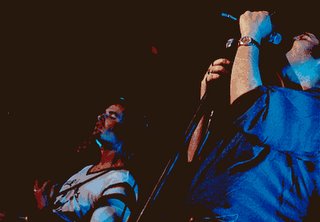 Carbon Leaf - I have to apologize, I didn't pay too much attention to these guys. Three of us grad school dudes walked into the show midway through their set. This 5-peice from Richmond, Virginia sounded more like an Irish drinking band than a rock band -- so we did what any good Irishman does, and DRANK. So that kept me occupied so I didn't remember too much about them when they were done. What I do know, however, is that Carbon Leaf plays good, medium-tempo Irish-rock, complete with penny-whistler and whatever you call those small-Irish guitars. They honestly sounded like they just flew in from a bar in Dublin to play. They played good, solid Irish rock that really made us want to party, so we did. Go check them out at their website.

Blues Traveler -- This is the second time I had seen Blues Traveler, but it had been nearly a decade, so my memory was a little shady. The Concert Guys 1st concert ever was 1996 Bridges to Babylon Tour, where I saw Blues Traveler open for the Rolling Stones at Camp Randall Stadium in Madison, Wisconsin. I was 14 years old. Talk about starting your concert career off on a high note!(note: my 2nd concert ever was Bob Dylan later that year, so two legends in my 1st two concerts!) It definitely does make me feel old knowing that I've seen a band 9 years apart! Well, one difference I knew would be obvious was John Popper's weight. In 1996, he was pre-gastric bypass. Now he would be skinnier. I will say, I saw him on tv after he had his surgery, and he looks as if he's put some weight back on since then (this seems odd since they usually say tv adds weight!). But he DEFINITELY looks much better than he did during their hey-day in the mid 90's. The death of original bassist Bobby Sheehan in 1999 was one key ingredient to his lifestyle-change. One thing I didn't realize was how long Blues Traveler has been around. When their radio hit "Runaround" hit the airways in 1995, not only was it off their 4th album (and 7th year together as a band), the album "Runaround" came off of Four, which had already been out for more than a year! So these guys have paid their dues and been around for a long while. Their show was evidence of their staying power.

It is easy to see why Carbon Leaf opened for Blues Traveler. They are both blues-influenced rock bands, perfering to play long instrumental solos than just standard rock songs (see- Grateful Dead). John Popper must burn off about 4,000 calories per show on his harmonica. He doesn't just play it once in a while, instead he plays it ALL THE TIME! Blues Traveler is one of those band that you don't need to know the songs, you can just listen to their instrumental sets and be entertained. And since they played for almost two hours, and I only knew about 5 songs of theirs coming in, you can bet I didn't know most of their songs! Of course they played "Runaround," harmonica-happy "But Anyway," Busch beer commercial song "The Mountains Win Again," and Hank's personal favorite BT song, "Carolina Blues" off of their 1997 album, Straight on 'Till Morning. Curiously absent from their set list was "Hook," but then again, when you have a catalog as big as theirs, it's not surprising (another case of a band not playing songs that you want to hear, as I wrote about last week!).

Blues Traveler also played a lot of songs off of their new album, Bastardos. I didn't know any of the songs, but they sound pretty similar to anything else they have done. The highlight of the night was the last song they played. They brought every member of Carbon Leaf, bringing total # of musicians on stage to 9. They then busted into a extended version of one of your's truly's favorite songs, (as well as fellow correspondant Steves' favorite band), a cover of Led Zeppelin's "Fool in the Rain," off of Zeppelin's 1979 swan song release, In Through the Out Door. It has always been one of my favorite songs, and never thought I would ever hear it live. They did a perfect version, really hammering those guitars and nailing the quick drums at the end after the long instrumental. They even got Page's great guitar sound at the end of the song. What a great way to go out. If you are interested in Blues Traveler, be sure to check them out at their website, and if you like old Blues Traveler, their new album shouldn't disappoint. 95.5 KGGO was the sponsoring radio station for this show, but I can't find any pictures of it. Sorry!

As one astute college student observed (Dustin Hoffman in the Graduate probably)"not everything old is outdated". Lots of nostalgia groups just play what made them famous but some keep reinventing themselves. I remember hearing music from The Blues Project in '66 and thinking their music would be timeless ....... and it is.

Somehow though I don't recall having time in med school for concerts except for the time I blew out my eardrums listening to The Dead set up in the fieldhouse at Iowa and play their "wall of sound" with speakers that stretched from floor to ceiling.