Concert Review: Naturally 7 at the University of Iowa's Memorial Union

To call Naturally 7 an impressive live performance would be a huge understatement. The deep thud of the kick drum is met with the thwack of the snare rolling off of the high hat. A funk-infused bassline meanders in smoothly with a cool patience. The keyboard and guitar react, while a turntable begins to scratch through to the surface.

Such a description could easily allude to any number of musical acts on the scene today. The exception is that this particular group doesn't have to haul any of these instruments along when they take the stage. Naturally 7 is an all-vocals band. 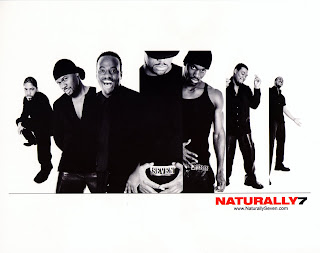 Thursday, March 29, the band stopped through for a free concert at the University of Iowa's Memorial Union Hawkeye Lounge. A mostly college-aged crowd of not more than a hundred filed into the venue – a small, but comfortable student lounge with couches, pool tables and a snack bar. The stage took up one third of the room. The performance could have brought down a stadium.
Seven men who formed together in New York City, Naturally 7 is a name which appeals to the nature of their sound – music as presented by the oldest human instrument, the voice. The group adamantly defies characterizations as a'cappella, a term which refers to singing without instruments. Naturally 7, on the other hand, use their voices as instruments – a style they call "vocal play." Not just beat-boxing, but wailing guitar licks, bellowing brass, and vibrant string arrangements. Every nuance is accounted for. The music needs to be seen to be fully appreciated.
Early in the show, the group performed their rendition of Mr. Mister's "Broken Wings," a song which concluded in a winged formation, with one member kneeling at the center. The final note was crushed by a stunning whoosh of feathers.

Between songs, the group acquainted itself with the audience, and reassured the roles played by each of its members. Each of the men took turns stepping forward to solo his instrument of choice.
Brothers Roger "N'English" and Warren Thomas are the backbone, with Roger arranging much of the music, and acting as Master of Ceremonies, tenor, guitar, and brass. Warren T. is positioned in the background like a typical drummer, but his uncanny vocal percussion abilities deserve a stage of their own. As N'English put it, "People come up to me and say, I like your songs but it's not all vocals. I hear real drums on there. And I have to say, No man, that's my brother."
The rhythm section holds strong with the group's newest addition, bass vocalist Armand "Hops" Hutton. The member with slightest frame, Hops also possesses a voice that would make Barry White smile down from heaven. His first words of the night came as a deep "How's everyone doin’ tonight?" which was met by surprise from the crowd, who responded with applause and laughter. "Why don't I get that kind of reaction when I say that?" asked Jamal Reed jokingly.
Reed is a natural entertainer who soars with stage presence and screeching guitar solos. Reed carried a dead-on Stevie Wonder as he fronted one of the night's best songs, "What Is It? (Excuse Me)." One lyric poses, “Is it R&B, gospel, funk or pop?” Perhaps the song should be renamed to answer the ultimate question, "How'd they do that?"
Multi-talented and playful Rod Eldridge rips out turntable scratches, keyboards, guitar, strings and brass, while also pulling lead vocals. With the aid of his favorite gadget, a loop pedal, Eldridge was able to layer his vocals indefinitely into his own one-man band. Garfield "G-Buck" Buckley is equally versatile, sharing leads with a barrage of instrumentation including flute and harmonica.
Certainly not least is baritone lead vocalist, and yes...multi-faceted Dwight Stewart.
Stewart's impassioned lyrics on "Say You Love Me" were one of evening's major highlights.
Stewart's vocal abilities are also showcased in the group's latest single, "Feel it (In the Air Tonight)" A re-structured version of a Phil Collins classic, the song is currently a Top 10 track throughout parts of Europe, and has gained a U.S. underground following thanks to a well-received YouTube.com clip of the band singing on a crowded Paris subway.
Having toured Europe and developed a strong following, the group has yet to make it big in the states. The septet's new album Ready II Fly is already available overseas, but has yet to be picked up for a U.S. appearance. N'English mentioned the group was aiming at a Fall 2007 release date. After the performance, an optimistic Stewart remarked that the biggest factor in finding a release is letting record labels know what separates the group from the rest of the popular R&B music on the radio. As he reiterated, "They have to know up front it's just us they're hearing. All vocals. That's it right there."
The evening’s sound acoustics were presented in fantastic clarity. That night, the group’s sound technician deserved recognition as an 8th member.
After singing their hearts out for more than an hour, Naturally 7 stayed around to sign autographs and talk with the fans who had purchased albums at the front table. The group would be leaving Iowa and heading home to the East Coast briefly before making a trip back across the pond to tour.
For more information about the vocal play of Naturally 7, visit the band's website at www.Naturallyseven.com.
Posted by Tae at 10:26 AM

Labels: concert, Feel it (in the air tonight), Naturally 7, Stream, University of Iowa

A great concert and review! One of the most talented groups I've see in a long time. You could have scraped the bass' voice up off the floor. I'm going to Iceland tomorrow and maybe will hear one of their great groups....... how about you doing a review of one for when I return?