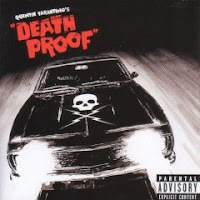 Quentin Tarantino's music selection is dead on in Death Proof, his shrine to 1970s exploitation films. True to Tarantino form, the soundtrack is diligently crafted, carefully plucking away at the AM gold of seventies soul and sixties mod. Pacific Gas and Electric makes an appearance, as does Eddie Floyd and T. Rex.

With feathered hair and vintage tees, the girls of Death Proof interact with the music in such beautiful ways that you are left completely shell shocked when, at one point in the movie, all you have left of them is a severed leg and the reverb of Dave Dee, Dozy, Beaky, Mick & Tich ringing in your skull. Never would one fathom that the boyish innocence of the British Invasion could provide the soundscape for such a chilling scene.

But in the end, it is that unthinkable bonding of the macabre with the unabashed debauchery of music that gives the stunning auteurism of QT its kick. While the touching melody of Joe Tex's voice may inspire most in the bar to reach out and dance with somebody, there are still those who are fueled to do something much more sinister. The songs of Death Proof are an excellent reflection of that very duality.

(As a sample, I've included 'Hold Tight' by the aforementioned DDDBMT below:)

I am blown away to think that a band I played as a DJ on the radio in 1969 made its way into a modern film. It was less than a year ago that I told Tae about this group and ordered an album by them for my oldies collection. They were one of the most popular of the British invasion groups, at least very popular in England. It only goes to prove that "everything is relevant".

They say that things come in threes so I'm up to the number two surprise in music this week. Today I was watching some new music on YouTube and came across a collaberation album between Ricky Scaggs and Bruce Hornsby. It is a great bluegrass version of some old and new music. Hornsby used to play with the Nitty Gritty Dirt Band and I spent an evening with them at Western Ill. U. in '74 along with the Beach Boys and Heartsfield. Old memories are great but they make you want to create more...... I'm waiting for the third revelation.... keep up the good work!