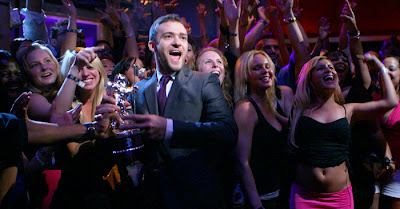 Sunday night's MTV Video Music Awards ceremony could best be summarized by man-of-the-evening Justin Timberlake, who accepted one of his several awards by playfully challenging MTV to "play more videos."

Befitting, considering MTV has gradually shifted in recent years to focus on reality tv and gossip shows more than anything video-related, much less music-related.

The network attempted to amend it's relationship with music on Sunday by unveiling an awards show based more on performances than on actual awards. This year's ceremony was moved to Las Vegas' Palms Casino, where multiple suites hosted the action for the evening. Timberlake and Timbaland, Kanye West, the Foo Fighters, and Fall Out Boy each had their own party suite to perform in throughout the evening. At the main ceremony, newcomer Mark Ronson remixed songs with various artists between awards.
Shortening the usual program length from 3 hours down to 2, the VMAs reflected a more attention deficient show by packing in performances and generally playing only parts of songs before breaking for commerials. However, several interesting collaborations took place, including CeeLo joining the Foo Fighters on their cover of Prince's "Darlin Nikki."
The show opened on the main stage with the highly anticipated return of tabloid punching bag Britney Spears, who proved to have passed her prime. Although her new single "Gimme More" commands a certain affection by reminding listeners, "It's Britney, bitch," her stage show was a bit lackluster. Still attempting to squeeze into her old lingerie, Spears barely went through the motions of her dance routine. At times, she seemed to forget not only about singing, but lip-synching as well.
Arguably, the best performance of the night was from the young Chris Brown, who dazzled with a spot on Michael Jackson impersonation during a medley featuring "Billy Jean." Now a seasoned VMA vet, Timberlake accepted his Male Artist of the Year award with class, applauding Brown's performance.
Curiously, almost all of the evening's award winners were also performers at the event. But, even with a show that has become increasingly more driven by the popularity of singles than the quality of music videos, it was quite refreshing to see the MTV Music Video Awards overflowing with what should be important. Music.
Click here to see full-length videos of the performances and more from the 2007 MTV Video Music Awards.

Thanks for the information.