The Return of Hanson???? 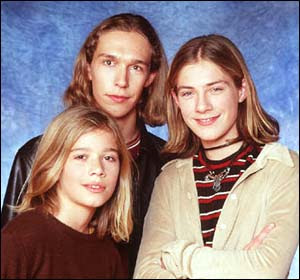 Now that I have your attention (and have scared the living bejesus out of you), let me tell you how I listened to a Hanson song for an entire month, didn't know it was them, and sort of enjoyed it.

One of my clinical stops on my 4th year of medical school was to the great city (and Hank's birthplace) of Chicago for the month of August 2007 (this followed a fantastic month of July, living at the abode of fellow lonelynoter Tae in Cedar Falls, IA). While switching cities, I always find within the first few minutes of arriving which radio stations I want to listen to and program them into my FM dial.

Pretty much the only station I listened to in Chicago was an alternative station Q101 (101.1), "Everything Alternative." It is a great station, except I think they play too much Beastie Boys and they have been playing to death a horrible punk rendition of Cindy Lauper's hit, "Time After Time" shamefully done by Quiet Drive (I can only hope for the band's sake that they are better than that). Other than those transgressions, they play sweet music all day long.

One of their gimics is to play a song for a month of a band you maybe know, not tell you who the band is, and let you guess (or cheat and look it up) for the entire month. The song would play several times a day, the dj's talk about the song, careful not to release the identity of the artist. Then at the end of the month they have the band on the show to announce that they have been the mystery artist of the month. Now the bands they pick are not unknown bands you have never heard of, but rather a band you maybe forgot about or a band trying a new sound. Either way, if you are as big of fans of music as we here are at the Lonely Note, you feel like you should be able to guess who it is, right?

Well, of course, big bad 'ol Hank thinks this game should be easy. I listen to rock/alternative music all day long, I'll get it! I hear the song for the first time. Hmm. The male singer on the song has a soulful voice, and sounds eerily like Michael Jackson at times. Could this be the King of Pop's big return? ("You aint seen nothin' yet!") I mean Jacko has been hiding out in Dubai working on his album and MIA for the recent past. This could easily be his big return, and using my logic, he could have a new sound, right? Something more alternative.....

No way. Too many times in the song the singers voice wanders from The Gloved One's trademark wail. And the singer is too reserved -- Michael would not miss a chance on his big comeback to let loose with his pipes.

My next guess was my only serious one, and I thought it was pretty good (although my girlfriend disagrees with me). It has been a while since we have heard any new Train, and I thought that it seemed like a good time for them to make a comeback. The singer's voice is in the same alto range as Train singer Pat Monahan with some of the same idiosyncracies of this voice, but never really completely sold me. But like I said, I used logic: it would be a good time for a Train comeback, the guitars weren't too far off, the beat was a believable Train beat, the timbre of the singers voice could resemble Monahan's, etc. I thought it was a decent guess, although others disagree with me on that one (For the record, my girlfriends best guess was, "Well, I don't know, but I know it's not Train! :-) )

I really couldn't come up with much else. I tried to think of a band I hadn't heard much from in a while who could sound like this. How hard could this game be? You listen to music enough and by the end of the first note of the singer's first word you know instantly who it is and what band. I thought of some alternative acts who might try and make comebacks: Dinosaur Jr. Silverchair. Hell, even Mudhoney. But none of them would sound anything like this. I know their voices. This is somebody else. Little did I know I would have to go back (way back) and think of a band who is as hated as the freakin' Spice Girls.............

Well the announcement day came. 5:30 p.m. on Thursday August 30, 2007. I was pretty jacked but pissed I didn't have a better guess. I had grown to moderately enjoy the song. It wasn't anything fantastic, or something I would seek out, but it was a catchy song and is just had a fresh feeling to it. Well, here's the mystery band, and it is.........

Hanson?? You mean those little blond haired punks from the 90's? With that horrible pop song and that lead singer that sounded like a girl? You mean the band that NO guy in their right mind would EVER admit to liking was this secret, indie, alternative band I had been jamming to for the past month? NO!! I could feel whatever credibility I had left as a music journalist ebbing away. My jaw stayed open for quite a while. I was floored. For a few minutes I forgot about the horrible, eternal traffic I was stuck in on the cursed-to-hell Eisenhower 290 in Chicago. Wow.

But it was true. Isaac, Taylor, and Zac Hanson were back, with a cleaned up, very adult, indie, and alternative sound. Without my predisposed notions to the band, you might think this was a pretty cool song and a band with a lot of promise. Well, that was exactly the point of what Q101 did. If they had announced it was a Hanson song when they first starting playing it, fans would have laughed and never gave it a chance, myself included. This way, listeners like me, who did not have the time to look it up and wanted to be surprised, could be. It was a great idea by the station, and really humbled a guy who likes to think he knows a thing or two about music.

Give, "The Great Divide," a listen. (Or stream it at the end of this post). It's too bad you won't have the same experience as me, and it will be tough to be unbiased, but give it a try anyway. But before you think I am crazy to think it's a good song if you don't like it, do remember I had NO IDEA who these guys were for the first 15 times I heard the song, and had no preconceived notions as you will most certainly have. It's a decent song, and who knows maybe they'll keep up the good work.

As a final note, I do know for a fact that this is not exactly their comeback. They have been back and still doing music for a few years now. But do remember this is their first song that would have been heard on stations that I listen to. Any Top 40 stuff they would have put out would probably have not been heard by me. So as far as I am concerned, this is their comeback.

Just so you know I am not making it up, here is the updated Wikipedia entry of the Q101 game at the very bottom of the wiki page.

Talk to you all soon, and happy listening:


Soon to come: Rage Against the Machine concert review (yes!) and a recap of Lollapalooza!
Posted by Hank at 1:16 AM

They are musical geniuses!

Huh, interesting. glad you gave them a listen but it's too bad you had to spend the whole post kind of apologizing for liking the song. It shouldn't matter who it is. Personally I thought the kids got a bad rap. They were never a boy band, they were really talented kids.

I never really understood why we were all supposed to hate Hanson anyway. Sure, some of their early stuff was kinda juvenile, but they were kids then, so it made sense for them to be juvenile. And now they're older and making more mature music. What's to hate?

Glad to see somebody giving those boys a fair chance (and let's face it, 101's route of introducing that song was the only way to give Hanson a fair airing) - they might not be everybody's cup of tea but they are really accomplished musicians and a tight rock band, who are stuck behind the shadow of their 13-year-old child-star pasts. If people remembered me only as I was when I was 11 then I would probably have gone into hiding by now.

Very interesting entry. Thanks for writing this up. You're right - it's not their comeback. They never took a break from music; they've just been under the radar of the mainstream for quite some time. Their previous album that was released in 2004 was also released independently and barely got any radio play. As far as I know, Q101 is the only major radio station in the U.S. to be playing any songs off of Hanson's new album. As I'm sure you're well aware, it's very difficult to get any radio play for a band that is not on a major label - especially for a band that has been stigmatized as badly as Hanson has been. They've been releasing fabulous music for years now, and I think it's a shame that people write them off as a joke.

Q101 is a first to do that for Hanson. In the last 10 years I dont know of other station to do that for the band. It's nice to see ppls reaction to the song. Hopefully many stations will follow and give the guys a chance.

great write up! I am glad that a radio station is giving Hanson a fair chance. Their music has changed a great deal. And not to mention The Great Divide was written and sold on Itunes to raise money for Aids research in Africa. A band with talent and is giving back.

p.s. you can still buy it on Itunes. it 99 cents and goes to a worthy cause

Hanson makes music with feeling. I was not a kid when they first became famous but I was drawn to their whole vibe of fun, and it's been an interesting ride watching them grow up and change a little bit at a time musically. I love where they have been and I love where they are going.