The following is dedicated to Hank, The Lonely Note's concert reviewer. He had to back out on this show at the last minute, but was kind enough to pass on his tickets so that Ted and I could attend in his honor. Thanks Hank. 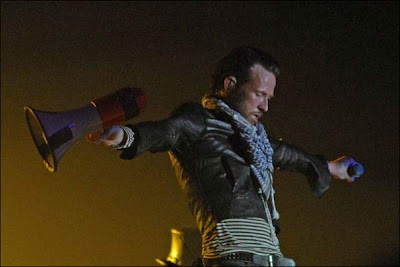 photos via DesMoines Register and Lazer 103.3
During their reign over the hard rock community in the early to mid-nineties, Guns N' Roses and Stone Temple Pilots were known for an ability to pack fans into stadiums and outdoor festivals. At that time, I would have never thought I'd have the chance to see either band perform in an intimate venue again. But here I am, more than a dozen years later, able to claim at least a variation of that dream.

On an unusually warm night in late January, I was able to see a group of legendary rock stars onstage together in front of an audience no larger than 2,500 people.

Velvet Revolver, a supergroup composed of ex-GNR bandmates and STP frontman Scott Weiland, have recently been performing a string of club shows to support their latest album, Libertad. On the 28th, the band made a tour stop at the Val Air Ballroom in West Des Moines, Iowa and rocked the place with new singles and old favorites alike.

Without an opening act, and starting almost an hour behind schedule, 4/5 of the band took stage and hurtled into a cover of The Stooges' 'I Wanna Be Your Dog'. Bassist Duff McKagen took ahold of vocal duties.

The band transitioned into a blues solo from Slash, whose trademark frizzy hair and top hat were in full showing.
Finally, a bearded Weiland made his non-challant entrance during the last few bars. It would prove to be the flamboyant frontman's least flashy moment of the evening.

From there, the band would dive headfirst into a 7-song set of mutual material, which included 'Sucker Train Blues' and 'Superhuman' off their 2004 album, Contraband.

It wasn't until launching into a set of old material that the band's stage presence really took off. On the STP classics, 'Vasoline' and 'Interstate Love Song,' Weiland's body writhed and gyrated into familiarity. Slash brought out a double-neck guitar on the GNR staple, 'Patience.' Weiland's vocals were as strong as ever as he wailed out, "Whoa oh oh, I need you!" The crowd sang back every word.

Guitarist Dave Kushner took a moment to give a shout-out, saying, "My whole family still lives here in Des Moines, they're all standing right over there." He pointed over to a large group near the side of the venue.

With plenty of steam left, the band rocked out new singles like 'She Builds Quick Machines' and 'Get Out the Door' with ease. Weiland introduced the band's hit ballad, 'Fall to Pieces' as, "...the first song we ever wrote together. It's one of those songs we immediately bonded over... I've lived it, every word."

Following a supercharged 'Set Me Free,' the band picked up and left the stage. Letting the crowd stomp and chant for several minutes, the band then returned for a notable encore. 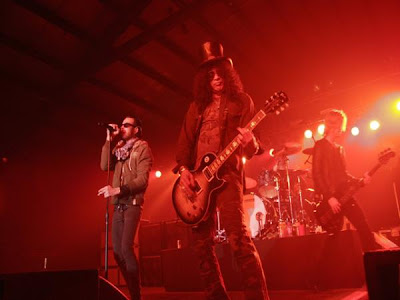 Slash re-emerged with a double-necked, 6- and 12-string guitar. With a cigarette poking out in front of his sunglasses, he eased into a classic rendition of Pink Floyd's 'Wish You Were Here.' Kushner brought out an acoustic, and the rest of the band joined in. The crowd took over the vocals on every chorus. But the mood wouldn't stay this calm for long.

Next they tore into familiar GNR territory with a hard-hitting rendition of 'Mr. Brownstone.' Weiland commanded the stage with a megaphone in hand. He crawled on top of the speakers, struck fanciful poses, and rubbed up against the guitarists. Dancing feverishly behind the drum riser, he even contributed to Matt Sorum's drumming by bashing out a cymbal part.

From there the band jumped into the fierce grunge of 'Sex Type Thing.' The STP standard sprawled into a 10 minute epic as Weiland abandoned the stage in favor of a bar top. The singer crowdsurfed his way back to stagefront, where he stood suspended above the crowd for several minutes, speaking in a rambling soliquoy. Meanwhile, the band entertained themselves. Slash played the guitar behind his head.

Weiland peeled off his last sweat-soaked layer of clothing, a striped longsleeve shirt, like a snake shedding skin. Appropriately, the band ended the show with 'Slither.' McKagen and Kushner raced across stage, trading positons on top of the monitors. Kushner's fingers moved in a fury. Slash burned his way through a solo.

With a few waves of thanks, and plenty of drum sticks and guitar picks thrown to the audience, the show was over. Weiland rode piggyback off the stage. The lights came on and the audience dispersed.

Velvet Revolver had spent a fine two hours on stage that night. The wide smiles of faces throughout the crowd seemed to agree.