A Musical Overview of Oscar Nominees 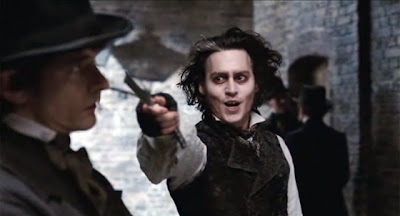 It's that time of the year again when the Academy Awards are on the tip of every critic's tongue. This Sunday's show marks Oscar's 80th birthday, and the ol' codger should be proud of several of the field's contenders.

My pick for the night's big winner goes to No Country for Old Men. The cast and screenplay of this morality play are impeccable and the cinematography is exceptional. The sound work is stark, subtle and unnervingly powerful. Javier Bardem's menacing portrayal of a serial killer already ranks up there with the best movie villains of all time. His character's Dutch boy haircut was even creepy enough to send the actor himself into a depression.

Paul Thomas Anderson's oil-soaked epic, There Will Be Blood, was another end of the year standout (notice how many of the nominees came out within the last 3 months?). The film is essentially one giant platform for Daniel Day-Lewis' masterful performance as a highly competitive, misanthropic oil prospector. Day-Lewis proves again that he is the man, and his work in this film is a coup de grâce to the Best Actor category.

I know what you're thinking: "What is all of this movie jibberish doing on a music blog?"

Well, did I mention that the score for There Will Be Blood was composed by Radiohead's Jonny Greenwood? Maybe you forgot that Eddie Vedder recorded the original motion picture soundtrack for Into the Wild. Across the Universe tackled the Beatles' extensive catalog of tunes for its whole plot and accompanying soundtrack.

Overall, this year's Oscar bunch has had some strong soundtracks. And while most of them are not nominated for musical achievement awards, I have decided they still warrant a post.

To start with an actual Best Song nominee, Glen Hansard and Markéta Irglová's duet "Falling Slowly" (from the movie Once) deserves the nod. The two songwriters, who are also co-stars of the film, deserve credit for the entire gem of a soundtrack. Hansard, previously known as the frontman to Irish band, The Frames, shares a genuine chemistry with Irglova in the heartfelt little film.

Next up is Juno, this year's only Best Film nominee with a sense of humor. Juno's spunky title character, played by Best Actress nominee Ellen Page, is a pregnant teen with a penchant for 70's glam rock and punk.

The film's fast-paced dialogue is full of quick retorts and conversations about music. At one point, Juno and her baby's soon-to-be adoptive father even have a conversation in which he plays her Sonic Youth's cover of The Carpenters' treasure, "Superstar."

Juno's cutesy anti-folk songs are balanced by classic rock from The Velvet Underground, Mott the Hoople, and The Kinks.

My favorite soundtrack moment has to be Barry Louis Polisar's "All I Want is You." Hearing the opening credits, I was instantly transported back to my childhood - a time when I listened to Polisar's 1977 album, My Brother Thinks He's a Banana & Other Provocative Songs for Children, like there was no tomorrow. I swear I still have that tape around here someplace...

And finally, I can't round out a comprehensive list without mentioning the stage-to-screen adaptation of Sweeney Todd, can I? Johnny Depp gets the Tim Burton treatment yet again in his role as the Demon Barber of Fleet Street. Depp and the rest of the cast rise to the occasion to pull off several fantastic vocal performances. But it is composer Stephen Sondheim who deserves the most credit for translating his own musical to work with the actors' vocal ranges. For your listening satisfaction, I'm including one of my favorite Sweeney Todd tracks, "Johanna," as performed by Jamie Campbell Bower, Johnny Depp and Laura Michelle Kelly.
Sweeney Todd OST - 'Johanna'
So, that's my take on the Oscars. What other films from the past year do you think deserve to be recognized for their soundtracks?
Posted by Tae at 1:30 AM

Next to Wham, Barry Louis Polisar ranked up there as a young boy's favorite, singable for even a father with no pitch. His hit song, "My Brother Threw Up on My Stufffed Toy Bunny", was legend in our household....... It is no wonder that his work has finally reached Oscar status, just too bad it took so long....

Here I am, the morning following the Oscars, pleased to confirm that my picks for this post were on target this year.

"No Country..." had the night wrapped up and Bardem clenched Best Supporting Actor. Daniel Day-Lewis won for Best Actor.

I was happiest when the duet "Falling Slowly" from Once won Best Original Song. One of the only true indie films nominated this year, with a soundtrack worth crediting. Plus, it's always great to give awards to the unsuspecting talents who are just thrilled to be present. Their humble acceptances beyond the usual hubbub of red carpet dresses remind you of why the awards even matter.