The Thrills - So Much For the City 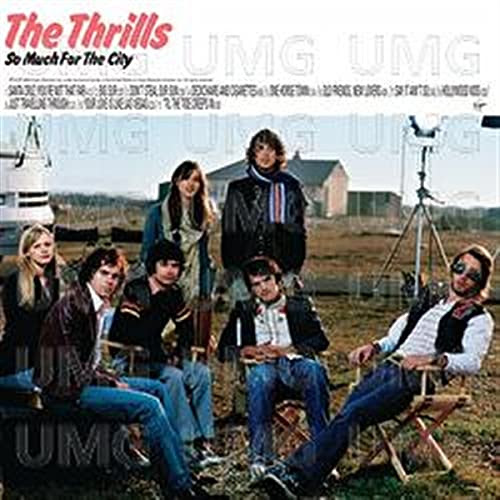 "So tell me where it all went wrong," longs the Irish rock outfit the Thrills on the initial track of their debut release. Greeting the listener with old time piano tunes, 'Santa Cruz' is a fitting introductory track for an album that is so much about the American West. Sounding like a washed up crooner in the midst of a drunken stooper, lead singer Conor Deasy emotes the tenderest of sentiments in a love song themed around the California city. Ironically, this album by five friends from Dublin seems to harbor more admiration for the American west than the average Yankee does him/herself.

So Much For the City is an album that serves as embodiment of the American spirit. Rugged, free and libertine, the tunes on this record are carefree and whimsical, transporting the listener to great expanses within the musical soundscape. Neo-Cowboys of sorts, the Thrills emancipate the listener. They open up the heart, and connect one's soul to nature and the American West.

Like an old vigilante omen, "Just don't go back to Big Sur" is a lyric on 'Big Sur" that provides feelings of both caution and adventure to the listener. As the old sheriff warns the greenhorn in the spaghetti westerns of old, so too do the words of Deasy: "So much for the street lights They're never gonna guide you home. No they're never gonna guide you home.....Just don't go back to Big Sur." In other words, do what you want Son, but don't do this. It can only be answered whether wisdom triumphs over eagerness in this sense.

In proving that it's better to burn out than to fade away, 'Hollywood Kids' is an ode to those who live fast and hard. But whether or not the Thrills are endorsing such a lifestyle is unclear in this particular song. "Oh the death of the fast life, those Hollywood kids have to pay" are words that serve as reminder that perhaps the excess of California life has outgrown its original intent. It is hard to say.

Poppy hooks and catchy lyrics, So Much For the City is by far one of the most overlooked albums of 2004. Those with a deep appreciation of the beach sounds of yore will greatly appreciate this album. But this is not to say that this is a simple rip off of the Beach Boys. As much as Oasis seemed to emulate the Beatles, that band had much to bring to the pop rock scene. In much the same way, the Thrills seem poised to remind us all that music doesn't have to be hard or complex to be good. It can be simple and it can feel good too. In this day in age of mass terrorist threats and questionable wars, an album that provides a warm and fuzzy feeling to the listener is one that should not be undercut. Buy So Much For the City if you want to be proud again.