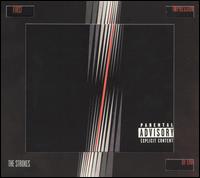 After Room on Fire was released, fans had to wait another three years before The Strokes released fresh material.  Unfortunately, First Impressions of Earth ended up being the band's weakest album.

Amidst rumors the band hated each other, First Impressions appeared to be the group's lazy attempt at phoning in one last album before finally calling it quits.  Of course, the band remained together, and First Impressions turned out to just be a cruddy album with not much of a rhyme or reason behind its horribleness.

While First Impressions, as a whole, lacked inspiration, the album did feature three high quality tracks.  Sure, the rest of the record may be garbage, but at least the opening three songs of the album are golden.
Here they are:
1.  You Only Live Once
It seems every band has that one terrible album that just so happens to spawn one of the best tunes of the band's entire career.  "You Only Live Once" is just that song.  Lyrically, it's brilliant.  Melodically, it may be the most solidly fantastic track of the band's repertoire.  But then again, I suppose I'm biased.  "You Only Live Once" is, hands down, my favorite track by the band.
[Video]
2.  Juicebox
By this time, the garage rock beast The Strokes had reawakened several years earlier had gone on to prompt bands like The Killers and The Bravery to use synth and bass to recreate the sounds of the eighties.  With a synthetic tinge, The Strokes created one of their most polished singles yet.  Despite its commercial appeal, "Juicebox" remained a healthy marriage of studio comfort with the rough and tumble the band was originally celebrated for.  Overall, this is a solid track.
[Video]
3.  Heart in a Cage
This song barely makes my list because at times the band seems to be merely going through the motions--especially on the vocals.  But just when you want to give up, the guitar arppeggios make up for Julian's lackluster singing and impressively pull this song up by its bootstraps into impressive dimensions.
[Video]
Stay tuned for the final installment of my favorite Strokes tunes within the next few days.  To read the previous installments from the beginning, click here.
Posted by Steve at 7:42 PM