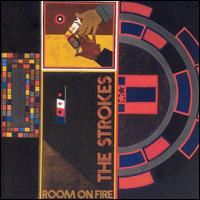 Two years after The Strokes jarred the rock world with its impressive Is This It, the band followed up with Room on Fire.  Although this offering was slicker than it's preceding disc, Room on Fire nevertheless surfaced as a captivating anthology of greasy, vibrant rock.  While some fans were turned off by the high fidelity recordings contained on this sophomore album, Room on Fire remains one of my favorite albums of the aughts.  To be sure, I own a copy of this record on vinyl.  (Need I say more?)

Consistent with my last posting, this is my second installment of my favorite songs by The Strokes.  Here are the Room on Fire tunes I am especially partial to:

This opening track is uninspiring at first, but once the multiple bridges reveal themselves, you fetch your first taste of a delicious, well-crafted record.  The vocals plead.  The collective guitars venture into remote areas of sonic territory.  The drumming establishes rhythmic signature.   On the whole, it's a galvanizing start to a solid album

"Please don't slow me down if I'm going tooooooo faasssssssttttt!"  Telling words from a band that had been catapulted to Messiah status by the rock press two years earlier.  On this second album, The Strokes had moved way beyond the low-fi structure of Is This It, but some fans hadn't yet caught up.  This lyric was a friendly admonishment.

With the exception of 'Last Nite,' this is perhaps one of The Strokes' most iconic recordings.  At the time of its initial release, the song contained cliches of indie rock yet to come:  Hand claps.  Tilting synth.  Guileless vocals.

To me, "12:51" is indelibly associated with my undergraduate experience.  When the song wasn't already playing on the radio, I'd solicit it myself by way of my MP3 player as background study music or as a tune to contemplate my newly founded adulthood to.  Some deep stuff.

Strangely endearing, "Under Control" was the closest thing to a ballad The Strokes had to this point ever produced.  You can detect hints of Smokey Robinson all throughout.  And the band maintains a narrower latitude than some of their other freewheeling tracks.  This is another one of my favorite offerings from the band.

Stay tuned for the remaining two installments of this series on The Strokes.  If you would like to read the previous installment, click here.
Posted by Steve at 12:00 PM