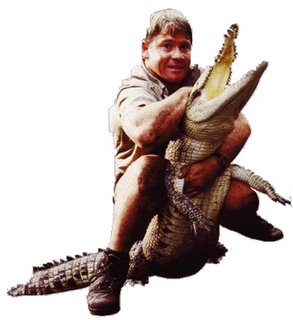 Although this does not qualify as music news, it is indeed a sad story. 44 year old Steve Irwin, better known as The Crocodile Hunter, died today after being stung by a stingray. Irwin was filming a documentary in northeastern Australia when he was stung swimming over top of a stingray. The barb from the ray pierced his chest through his heart, and he was pronounced dead at the scene.

From when he first came to fame in 1992, myself, along with many of you I'm sure, grew up watching his fearless antics and listening to his deep Australian accent. In a world sometimes full of pain and suffering, it was always comforting to know that somebody out there enjoyed life as much as he did. Much like the late painter Bob Ross (I'm a huge fan of his), he always brought a smile to my face when I would see him on tv. Although he would at times seem careless in his work, you always felt a sense of calm knowing he was in control. What you can't dispute was his love for animals and the outdoors. His name was synonomous with nature, and nature will sure miss his enthusiasm and love.

He died doing what he loved, and the world loved watching him do it. Rest in peace Crocodile Hunter. The world has lost a great man in Steve Irwin. Crikey.

AUSTRALIA HAS AN OVERSEAS SPOUSE QUOTA FIXED AT 30,000 A YEAR
—————————————
The following is an article from the "Sydney Morning Herald"September, 17th, 1996.
"MIGRANT LAW MAY SEPARATE MARRIED COUPLES
The Government will cap and kill applications by Australians to bring their overseas spouses into Australia a move which would see long-term separations of married couples unless the Opposition allows through the Senate tough new measures to curb applications.
The Minister for Immigration, Mr Ruddock,said the draconian move,allowable under present law but never used in relation to spouses, would help curb huge increases in applications for spouses, some of which were shams, but others 'a fraud on Australians'.
Under present practise,applications for offshore spouses to come are allowed regardless of the quota set.Mr Ruddock wants to enforce his quota by a cap and queue regulation, making applicants after the qouta is reached to wait, possibly for months, until heading the queue for next years intake.
But in the face of Labor opposition in the Senate, he threatened to use his general cap and kill power to terminate applications made post-qouta.This would force Australians to apply again next year on equal terms with next year's applicants, causing indefinite separations.
Mr Ruddock's threat, which contradicts the Coalition's strong pro-family rhetoric but is part of a clampdown on migration numbers,was denounced by Labor's immigration spokeman, Mr Duncan Kerr, as social engineering.
The Opposition last week knocked off in the Senate one of several changes to regulations to tighten elegibility for 'preferential family' migration,available to spouses and aged parents.Mr Kerr told the Herald Labor would also disallow Mr Ruddock's 'cap and queue' regulation.
Mr Ruddock told the Herald that if people who had already applied were allowed in,the progam would overstep this year's 36,700 quota by about 13,000.Rather than allow an overshoot, he would use his general power under current law to cap and kill,unless Labor stopped trying to micro-manage his immigration program by disallowing regulations in the Senate.
Mr Kerr said that 'Australians have always exercised their own choice on who they'll marry,and I don't believe any red-blooded Australian will allow the Government to force couples to queue up to live together.Now he's saying if he can't queue them he'll cut them off.
'If you meet and marry in January,thats OK,but if you're a December bride or groom you mightn't be able to get your spouse in for years.'
Mr Ruddock said he did not regard cap and terminate as the best outcome, but if it is necessary I will be applying it.
He said Labor had maintained a steady 37,000 quota for four years,before lifting it last year to 50,000.Many people had reported partners 'walking out the door as soon as they arrive in Australia.' 'The fraud is being occasioned on Australians by people seeking to migrate,' he said.
Mr Kerr blamed the increase on the wash-up of the Tiananmen Square massacre,under which Labor granted 40,000 Chinese people refugee status.But Mr Ruddock said there rises in applications accross the board, and the percentage increase was as great in England."
------------------------------
JOHN HOWARD-The Lying Rodent.John Howard wants free trade but not the free movement of people.He thinks Australias biggest assets are its sheep, coal and uranium not people.He says he has the final solution to our problems "Too many people."
------------------------------
The Blacklist
"Philip Ruddock gazetted regulations when he was Australia's immigration minister[number S241 of 1997] to stop visitors from many countries coming to Australia and among them is Poland.[Israel is also on the list as well as the following countries-Bangladesh, Burma, Cambodia, Chile, China, Colombia, Croatia, Cyprus, Czech Republic, Egypt, Fiji, Greece, Hungary, India, Iran, Jordan, Lebanon, Macedonia, Mauritius, Nauru, Pakistan, Peru, Philippines, Portugal, Romania, Samoa, Slovakia, Sri Lanka, Syria, Tonga, Turkey, Ukraine, Uruguay, Vanuatu, Vietnam and Yugoslavia]."