It's hard to believe I've never posted about Dino before, but it seemed appropriate to wait until V-Day to drop his 1990 cheesefest, "Romeo" on you. 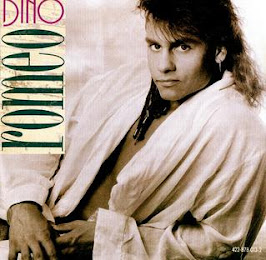 I first heard Dino in my favorite 1992 Rodney Dangerfield/Jonathan Brandis cross-dressing soccer comedy, Ladybugs, in which his song, "Summergirls" was used.

The same year, Dino got booked as an opening act for the insanely popular New Kids on the Block tour.

"Romeo" shot its way to #6 on the Billboard Hot 100 that year, due to a sugary sweet pop chorus and, yep, a guest rap by Doctor Ice (of UTFO).

With a healthy dose of New Jack Swing and freestyle dance, "Romeo" was destined to break some hearts while tearing up the charts.

The music video is a pretty incredible historical document of the culture of 1990, as well.

With fashion choices nothing short of colorful, Dino alternates between a mustardy sport jacket and a white tee emblazoned with the slogan, "My Race is Human", as he serenades our souls.

Enthusiastic backup dancers bounce in and out of frame like over-caffeinated extras at the Peach Pit on Beverly Hills 90210, cementing the video's place in the annals of pop history.

Whether you're feeling hopelessly romantic or just a little '90s nostalgic this V-Day, take a page from the Dino, the master of smooth: