Steven Wilson, the prolific and multi-talented British musician and songwriter, returned this past month with his latest solo album, The Future Bites. 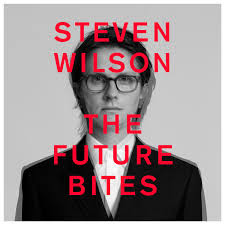 Wilson is best known as the frontman for the contemporary prog-rock band, Porcupine Tree--a group that amassed ten albums and another seven EPs over a twenty year span.

I first heard Porcupine Tree more than a decade into their career with the release of 2002's remarkable commercial breakthrough, In Absentia.  The single "Trains" from that album is still a favorite of mine, and is a great entry point for new listeners.  Porcupine Tree's follow up album, Deadwing, was an equally impressive effort, combining Pop songwriting sensibilities with complex Prog and Metal arrangements.

Wilson has also recorded six of his own solo albums, in addition to working with several other bands and remix projects.  On 2021's The Future Bites, Wilson finds himself immersed in electronic music more than ever, with songs making digs at consumerism and critiquing the effects of a technological society on our personal psyches.

His latest single, "SELF", is a great example of just that.  The music video uses deepfake technology to alter Wilson's appearance, morphing him into various celebrities. The album's slinky electo-funk recalls Young Americans-era Bowie for me, at times.

The video can best be summed up by the artist's own words, taken from the description on his official YouTube video, shared below:

"SELF is about our new age of narcissism and self-obsession, one in which a human race that used to look out with curiosity at the world and the stars now spends much of its time gazing at a little screen to see themselves reflected back in the mirror of social media. In that sense everyone now can take part in the notion of celebrity, and has the potential to share their life with an invisible mass of people they will never meet. The video takes things further by exploring the idea that anyone can now project a version or “self” that has no bearing on reality, and by using only well known faces the deception is made transparent." - Steven Wilson

Additionally, the video's director, Miles Skarin commented on his work in regards to creating deepfakes, saying, "Anyone with the right tools and ability can now turn themselves into anyone else, so what does that mean for identity?"

Watch the video for Steven Wilson's "SELF" below:

If you enjoyed that, I also recommend watching Wilson's music video for "Personal Shopper" off The Future Bites.

You can learn more and order the full album by visiting Steven Wilson's Official Website.