Interpol to return in '07 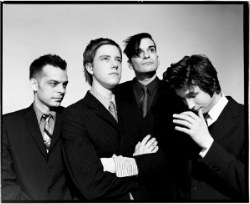 Rock group Interpol has been hard at work on their third studio album, which they've been working on since early 2006. The album is expected to be released sometime in 2007.

The group released the following statement on their official website:

We’re hard at work on the writing of album three. We’ve been at it for six months - in case you heard we were on hiatus. We’re all very excited about it and think that you will be too. Having yet to record, we can only say that Release will come sometime next year.

In addition, Interpol did reveal some working titles for a couple of tracks they are working on. With song titles like "The Heinrich Maneuver" and "Pawn Shop" on the docket, the third Interpol album is slowly taking shape into something that hopefully resembles their fabulous debut, Turn on the Bright Lights.