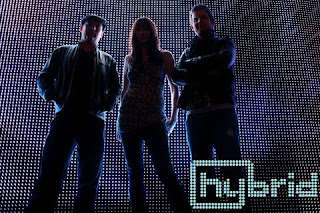 If you've ever heard the music of Welsh band Hybrid, you should get a sense for their name.

The band plays a mix of electronica and rock that is simultaneously edgy and delicate. Progressive dance beats and dark, cinematic rock are often the underpinnings for strong melodic arrangements.

The group, led by Mike Truman and Chris Healings, has released four proper albums in the last decade, as well as multiple remix albums and singles. The band is known best for remixing the songs of other prominent artists, including Radiohead and U2; however, their work has also been featured in film and television for years.

For Hybrid's 2010 album, Disappear Here, the duo expanded to include the songwriting talents of Charlotte James. James' fragile vocals add an emotional element to the trance and techno roots of the band and often act to contrast the Prodigy-like shouts of her male counterparts. On "Salt" - one of my favorite album tracks - James' bewitching voice echoes over layers of jungle rhythms.

In addition, the group worked with Andrew Skeet and the Prague Philharmonic Orchestra to create the rich tonal textures of the album.

The songs, which typically clock in above 5 minutes apiece, are sprawling, yet possess the lush pop sensibilities and structure shifts to avoid becoming wallpaper. On Disappear Here, the group seems to be working more comfortably as a "band" than ever before.

The end result is a midnight soundtrack of songs that are moody and atmospheric, sensual and complex, a la UNKLE or Massive Attack.