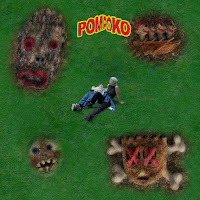 Pom Poko is an idiosyncratic outfit hailing from Norway.  Their debut album, Birthday, was previously nominated for the Nordic Music Prize and two Norwegian Grammy Awards.
'Like a Lady' is the second track on the band's latest offering, Cheater, which just dropped last week.
Comparisons to fellow Scandinavian rocker Bjork are all too easy, yet unavoidable.  Lead singer Ragnhild Jamtveit's vocals are just as loveable and quirky as her Icelandic predecessor, while fused with catchy, grungy guitar that propel 'Like a Lady' into modern indie rock territory.
You can stream 'Like a Lady' in the audio-only player below:
Posted by Steve at 9:21 PM