The mid-90s (AKA: my formative years) was a time period ripe with angst and unapologetically flooded with alt-rock bands.  It was a strange time--sandwiched between Grunge and Nu-Metal--where a diverse range of sounds were all competing to be the next big thing.

My local alternative station, 107.5 ("The Dot"), was always the place I'd turn my radio dial for the latest music.  Not all of it was up my alley, or even destined for greatness, but the station wasn't afraid to play some weird stuff, which really opened my ears to a whole new world of music.

Seemingly overnight, the station switched formats, and those of us tuning in to hear the latest from Veruca Salt or Harvey Danger, were instead met unexpectedly with new bubblegum Pop artists like Britney Spears and the Backstreet Boys.  It was truly the end of an era, though it didn't stop my affinity for Rock.

Here's a 107dot5 Spotify playlist I've pieced together from memory in remembrance of the station.

Of course, as I've often pointed out in my blog posts, a lot of great bands still flew under the radar, and I love rediscovering bands I missed the first time around.

Another such band was Kilkenny, Ireland's Kerbdog. 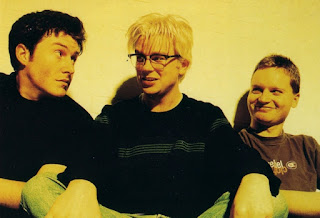 Formed in 1991, Kerbdog merged elements of alternative/college rock and metal for a sound that was both edgy and melodic.

While stateside radio stations were obsessing over The Cranberries, fellow Irish bands like Kerbdog and Therapy? were busy cranking out the riffs.

Kerbdog was pursued by at least 22 labels, and was signed to Mercury records in 1993.

Kerbdog's sophomore album, On The Turn, was released in 1997 and featured the singles "Sally", "JJ's Song", and "Mexican Wave".   Unfortunately, the singles failed to catch a mainstream audience, and the band was shifted around during record company buyouts before being dropped entirely.  About a year later, without a label, the band split up.

Two of the members would go on to form a new group, Wilt, for several years.  Kerbdog has since reformed for various one-off performances over the past two decades, although they have not released any new albums.

On The Turn's enduring cult status has been heralded as influential by such bands as Scotland's Biffy Clyro, but is still largely under-appreciated and worth a listen.

Watch the videos for Kerbdog's singles, "Sally" below: