The Doors - 'Tell All the People' 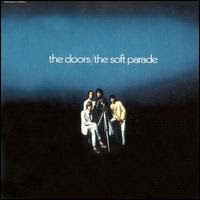 Although probably their least acclaimed album, The Soft Parade spawned a number of daring tracks that strayed away from the usual Doors model.

'Tell All the People' was just one such number. With marching brass prefacing Morrison's vocals, the entire canticle comes across as one bloated, over-produced, Fat Elvis of a song that...surprisingly works.
Perhaps it is its sirenesque hook, or its whimsical lyrics:

"Follow me across the sea/Where milky babies seem to be; Molded, flowing revelry/With the one that set them free"

Or perhaps, instead, it is the fact the song was composed by guitarist Robbie Krieger that 'Tell All the People' comes across as a breath of fresh air for those treading the Doors catalog.
While 'Tell All the People' may never top the trendy influence of 'Crystal Ship' or 'Love Street,' it will always hold an important spot as a flavorful sensation within the vaults of deep Rock and Roll.

Labels: Soft Parade, Stream, Tell All the People, The Doors

i've made a second set of remixes


The "Eardrums shall fail" blog said:

"Rarely have I heard a reinvention of music I was, or thought I was, familiar with, in such unexpected ways. "

"interesting bedroom remixes, some of the best I've heard in a long while. "