My Argument for Core 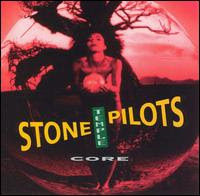 Believe it or not, one of my fondest memories is that of Ted and I arguing until the wee hours one morning as to which was the better Stone Temple Pilots record: Purple or Core. As it turns out, I was a Core man, while Ted was a Purple man.

What makes the argument so fascinating is that each album has so many strengths to draw upon. Purple was more commercially viable, lending us tracks like 'Vasoline,' 'Big Empty,' and the magnus opus 'Interstate Love Song.' ("Only yesterday you lieeeeed!"). Additionally, Scott Weiland seemed to permanently transform his voice to a much higher (but appealing) register on this album.

Core, on the other hand, was the debut culmination of a band that sounded a lot like grunge rockers Pearl Jam at the time---but when really examined, didn't really sound like Pearl Jam at all. STP's music, even in its earliest stage, was more cleaned up, more primed for radio than Pearl Jam's Ten and Vs. ever seemed to be. Sure, STP's 'Dead and Bloated' and 'Sex Type Thing' seemed laden with punked-out anger, but Pearl Jam's 'Go' and 'Animal' were even angrier. And to top it all off, Core took a page out of the Dark Side of the Moon playbook with instrumental transitions that segued tracks like 'Wicked Garden' to 'Sin.,' and 'Plush' to 'Crackerman.'

When it comes to making the final decision between Core and Purple, the ultimate factor, for me, is the strength of the supplemental tunes: the non-singles. While Purple is certainly a classic album for the band, tracks like 'Army Ants' or 'Kitchenware and Candybars' seem too clean or too cloned from its immediate antecedent. (Does anyone not think that 'Kitchenware and Candybars' sounds like a 'Where the River Goes' part II??) Conversely, Core contains songs of passion and conviction, even if they do lack the studio cleanliness that Purple's 'Big Empty' perfects.

Regardless of where you may stand on the issue, I've included a song off each album: Core's 'Sin' and Purple's 'Still Remains,' for your own studies. Even if you may not possess a strong opinion either way, be sure to enjoy!


Still Remains
Posted by Steve at 3:23 AM

STP was one of the most under rated bands of their time, followed closely by Alice in Chains. I think my grand kids will ask me about them before they ask about Pearl Jam....strtange as it may seem.