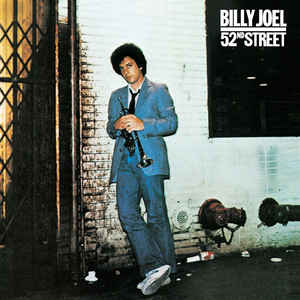 Anymore, it is rare as hen's teeth for a studio album to contain a sequence that keeps hitting track after consecutive track after consecutive track.
I suppose much of that may have to do with the single-centric music culture we seem to find ourselves in.  And perhaps much more of that may have to do with the short attention spans the plurality of the American citizenry seem to currently have as well.  What with the Tik-Toks and the Snapchats and the Tweets, the dopamine injections social media provides is often a much more attractive option for one to spend an evening doing than to actively listen to a longform audible masterpiece that requires more than five minutes of focus.
But I digress.
Of course, many Beatles albums fit the bill of sequential sublimity; as do those by Michael Jackson. Probably my earliest firsthand experiences with such a treasure trove of continuous audio bliss were with Ten by Pearl Jam and Nevermind by Nirvana. The first half--if not more-- of both of those albums have an indescribable chemistry, a consummate formulation that would do worse if produced in any other way.  I am sure there are numerous examples of other like-kind albums that I am forgetting or neglecting to mention right now.
Billy Joel's 1978 release, 52nd Street, fits the definition of the seamless album structure as described above.  At least the first five songs on the album consist of one of my favorite track successions.  Below is a synopsis of each, and why I believe they make up the bulk of one of the greatest piano rock records ever.
1.  Big Shot
Not much needs to be said about this one.  'Big Shot' is one of Billy's biggest hits that is probably still played on most oldies stations today.  It's uptempo opening and large rhythms comprise a well served and over-the-top introduction to an album that would knock the socks of many listeners of the day.  Billy also sings in a dramatic New Wave Punk style that was emblematic of the era.
2. Honesty
A palate cleanser, 'Honesty' is a heartfelt ballad that I just so happen to believe is Joel's best composition ever.  No pun intended, but if any set of lyrics speak absolute truth to its underlying message, 'Honesty' is it.  For those of us fortunate to find ourselves in long term marriages or relationships, the song's message serves as convincing advice that many of us can attest to.  For a true romantic partnership to work, it requires vulnerability, sincerity, and compassion;  lust and histrionics may work in the short term, but they are never sustainable.

I can always find someone

To say they sympathize

If I wear my heart out on my sleeve

But I don't want some pretty face

To tell me pretty lies

All I want is someone to believe

This is another track that needs no introduction.  Just like 'Big Shot,' it is another standard of the Great American Oldies Songbook.  The quintessential song of telling someone else to mind their own business, 'My Life' is politely rebellious; the lyrics may be telling the world to back off, but its underlying tune is a jaunty sing-along.  Highly relatable, 'My Life' has likely hit a chord with many who want to pursue their own happiness without the interference of judgmental authority figures and frenemies.

(Note: the video below features  the beginning of the fifth track, 'Stiletto,' in its intro).

At this point in 52nd Street, things begin to get interesting.  'Zanzibar' is a gritty ode to masculinity; a lament of a bachelor in the New York City metroplex who just so happens to likes booze, baseball, and women.  (Shocking, right?)  Its structure is equal parts theater production and equal parts speakeasy jazz.  This is probably one of Billy's most sophisticated creations, with multiple change-ups in a short five minute timeframe.  The choral hook, however, is what makes 'Zanzibar' a diamond in the rough.

I've got the old man's car

I've got a jazz guitar

I've got a tab at Zanzibar

Tonight that's where I'll be, I'll be

With the fifth track, Billy rewards the listeners who have loyally listened thus far with jazzy syncopation and staccato, the nucleus of much of his catalog.  Not to worry, though, the track is still fundamentally pop in its structure.  While its introduction may resemble the lovechild of 'Careless Whisper' meets West Side Story, the half-minute mark gives way to the raucous storytelling Billy Joel has made millions on.  Just a man and his piano, 'Stiletto' is the essence of Billy Joel, and certainly the antecedent to later-comers like Ben Folds.