Vök - 'Lost in the Weekend'

A few summers ago, I took a memorable trip to Iceland.  The country's stark and dramatic landscape was breathtaking.  We drove the coastal highway between sporadic, quaint towns, flanked by the ocean on one side and rocky cliffs and waterfalls on the other. 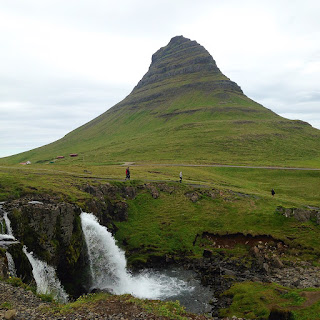 We stayed on a volcanic island (Vestmannaeyjar) one night, a horse farm in the middle of--essentially--nowhere on another, and in a domed glass rental house nestled deep inside a valley the next.  We threw our coats over the windows to block out the near 24-hour-daylight of the summer season. Time, as a construct, was pretty meaningless when it was as bright going to bed as waking up, and it took a bit more discipline to go to sleep at any point.

We waded in natural hot springs--both established and off the beaten path--and soaked up the cool misty air and amazing views around us.  We drove down windy gravel roads without seeing another car for miles on end. We ate amazing food, drank local beer and experienced the capital city of Reykjavik's vibrant and artistic culture.

I was astounded that the country's entire population (approx. 357,000) was on par with that of my own small city back home in Des Moines, Iowa.  In other words, once you got outside the bustling airport and tourist attractions, Iceland was an easy place to disappear into solitude. 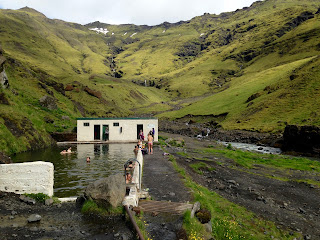 While in Reykjavik on our last full day before flying home, we stopped into the super cool Lucky Records.

The shop was already closing for the day, but we still had just enough time to comb through the local music section and put on headphones to listen to some unfamiliar Icelandic artists.  I was, of course, familiar with the likes of Björk and Sigur Rós, but there was a sea of music at my fingertips to explore in a short time.

I only had enough room in my suitcase to stash one LP without the threat of bending, so I had to act quickly and decisively in my purchase.

And then I turned my headphones on to Vök. 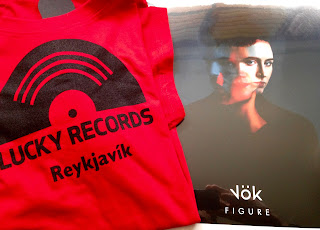 The Icelandic dreampop trio instantly caught my ear when I put on their album, Figure.  The pensive and introspective atmospherics and pulsating rhythms encapsulated much of the feeling and emotion that I'd had driving around the countryside that week.

The store clerk tapped me and said, "Okay, we're closing now", which snapped me out of my music-induced stupor.  I quickly snatched up a copy of the album and a red t-shirt with the Lucky Records logo, as the employees locked the doors behind me.

That record, Vök's Figure, made it home in one piece, fortunately, and still brings me back to that trip whenever I put it on.

Earlier this month, the band released a new music video to their latest single, "Lost in the Weekend", describing it as focusing, "...on the ease of over-indulgence when you’re living in the moment and the purposeful loss of a sense of self."

It seems like a pretty good takeaway message.  For me, Reykjavik would have been an easy place to get lost in the moment--losing all sense of what day or time it was in endless daylight, surrounded by art and music and food and drink.  As much as I enjoyed my time in the city, it was the stunning landscape of the nearby countryside that brought me the most self-reflection and relaxation.

You can watch the video for "Lost in the Weekend" below, via Vök's YouTube:

For more on Vök's music, visit the band's Facebook page.