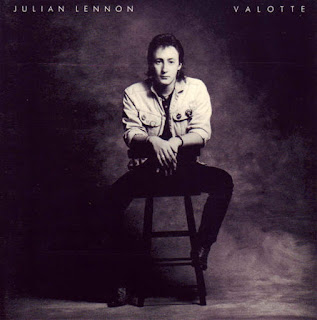 My keen preoccupation with piano ballads continues to dominate the conversation with a spotlight on a 1984 single by Beatles offspring, Julian Lennon.

'Valotte' was the opening track of the eponymous debut album of John Lennon's eldest son.  And while the album may be lazily remembered by armchair musicologists for the much poppier 'Too Late For Goodbyes,' 'Valotte' is the stronger composition in my opinion.

Released only a few years after the elder Lennon's murder, the track is haunting on multiple levels:  for its lyrical depiction of a romantic relationship in its waning days; and perhaps more so for its vocals and stylings that sound nearly identical to a beloved man who was no longer alive.

While I am sure many Beatles fans clamored for Julian's  musical offerings in the wake of his father's death, I am just as sure its fruition nevertheless served as an unfortunate reminder that the biological impersonation can rarely fill the void left by the loss of its progenitor.

This is not to say that Julian's music is bad or subpar---far from it.  Instead, I merely point out that, while he may have been privileged to have a mythic musician for a father, he was likewise disadvantaged by the same's inescapable shadow.  No matter how immensely talented Julian could ever be, the wound of his father's death was too fresh for fans to move on from and to separate from the son.

(Don't believe me?  Take note of the career trajectory of Julian's half-brother--and John's son with Yoko Ono--Sean Lennon, a likewise talented and brilliant artist in his own right).

Nevertheless, I believe enough time has passed for 'Valotte,' the song, to be given an independent look and listen.  Structurally, the track is full of infectious hooks and plaintive verses.

And its measured march toward the rewarding choral climax is splendidly tender.  Had Billy Joel or Elton John penned this song, it would have been canonized.  Think about that, and keep an open mind, when you take a look at the video for Julian Lennon's 'Valotte' below: