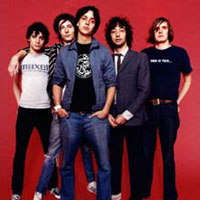 It is a pretty slow concert month in Des Moines. There are tons of good local and regional bands playing great venues in Des Moines like Hairy Mary's, House of Bricks, Vaudeville Mews, and many others. But with school, I just don't have time to check them all out. The major concerts start hitting the area in February, and you WILL be hearing about them. Until then, I have to keep myself busy somehow. My New Year's Resolution was to buy more CD's. So in order to do that, I have to know what's out. About every month or so, I will try to put out a short list of new and upcoming Rock releases. There will be some pop/punk listed, but since I tend to listen to a little heavier variety of music, I will try to keep it in the rock/metal/alternative category. This is not an all-inclusive list, just release dates I could find. Some of these bands you will know, some you may not. Check them out!

The Strokes – First Impressions of Earth

And the new INXS (with that "awesome" Michael Hutchence replacement from the TV show!). SCORE!!!