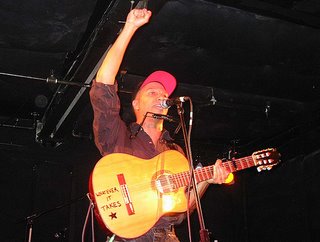 So Tom Morello has gone soft on politics after
joining Audioslave, right? HECK NO! If you thought it would be easy to shut up this constant political activist, one must simply look towards his bloodline. His mother, Mary Morello, founded Parents For Rock And Rap, an anti-censorship group (the antiphyses of Tipper Gore!!!) and has been active in the NAACP and Chicago Urban League. His father, Ngethe Njoroge, was a Mau-Mau rebel who helped overthrow British rule of Kenya in the early 1960's, as well as being the first Kenyan delegate to the United Nations.

So, in addition to founding Axis of Justice with System of a Down's Serj Tankian, Tom travels the country with his acoustic guitar as his alter ego, The Nightwatchman. Just who is the Nightwatchman? "The Nightwatchman watches out for the people," Tom has been known to say. Fans of Audioslave and Rage Against The Machine (and hell, even Electric Sheep) will not get what they expect from typical Tom Morello fair. The Nightwatchman is very folksy, very Woody Guthrie-like. It is just Tom singing and playing his acoustic guitar. No killer riffs, wah pedals, or whammy bars. No "Soul Power" Fender Stratocaster or fast fret work. Just a stripped-down Tom singing politically-tinged folk music. Rest-assured you won't be seeing many mosh pits at a Nightwatchman concert.

I'm not going to lie -- The Nightwatchman isn't exactly what I would call the greatest music I have ever heard. But then again, The Nightwatchman isn't just for Tom, it's for a cause. As much as you might not like something, you have to give it props for fighting for something (much like when Pearl Jam covered "Last Kiss" -- horrible song, but it was for a good cause so you couldn't hate it too much!). He has contributed tracks to the Axis of Justice CD as well as the song "No One Left" for the soundtrack for Fahrenheit 9/11. He has played at various sites on the road, including an AFL-CIO awareness concert and an impromptu show in Kenya. Tom really puts a country-twinge into his voice, trying to sound very much like Bob Dylan. There is really not much to the Nightwatchman, just an 0dd-sounding Mr. Morello and his interesting lyrics. There are no exact tour dates upcoming (especially with Audioslave putting their finishing touches on their 3rd Album), but rest-assured Tom and his traveling guitar will continue making random stops at random times championing his message of social justice. And being a recent recipient of the Eleanor Roosevelt Human Rights Award (along with Danny Glover), his work is paying off.

So exactly what is the Nightwatchman? It can be summed up this way:

"The Nightwatchman is all about three chords and the truth."
~Tom Morello

Keep up the good work, Tom.

You can listen to some of The Nighwatchman here. Or just check out the Fahrenheit 9/11 soundtrack or Axis of Justice CD, since there is no actual Nightwatchman LP.
Posted by Hank at 8:42 PM